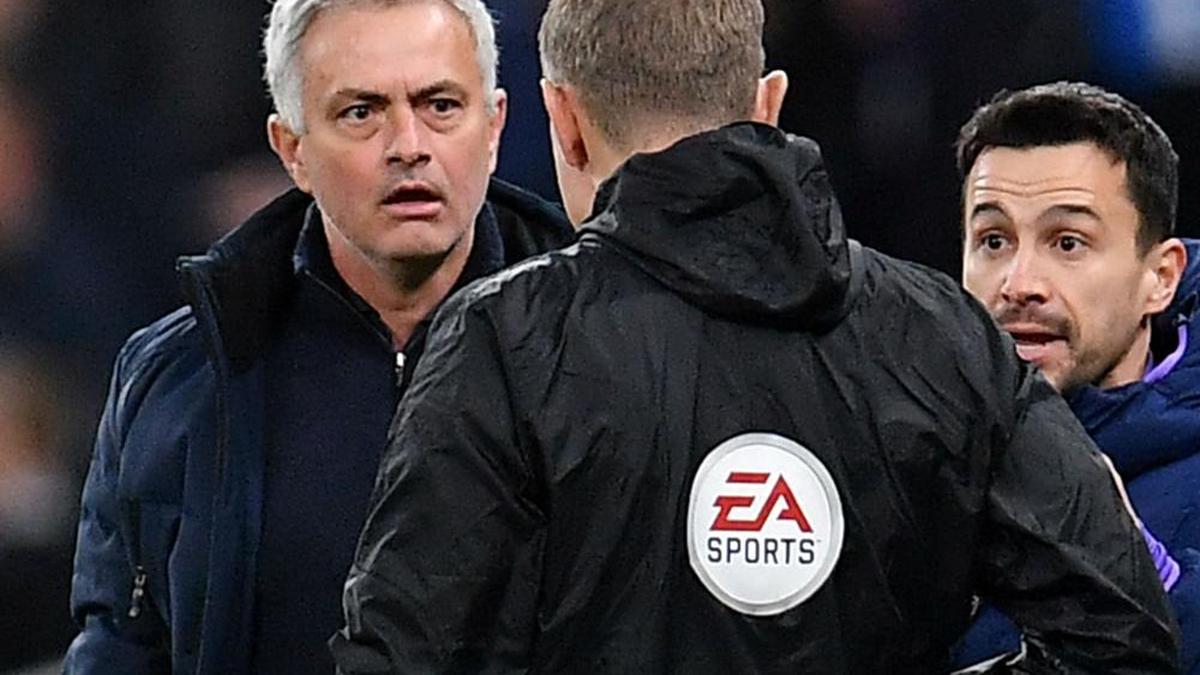 Second-half strikes from debutant Steven Bergwijn and Son Heung-min sealed a valuable victory for Mourinho’s side on Sunday, with City having seen Oleksandr Zinchenko dismissed for a second booking on the hour mark, shortly before the opening goal.

Ilkay Gundogan had a first-half penalty saved for City, which had 18 shots to its opponents’ three, but Mourinho believed it would have been a very different contest had Sterling been shown red for a 12th-minute challenge on Dele Alli that was reviewed by VAR, only for a yellow card to be awarded.

Sterling’s foot appeared to brush the top of the ball before making firm contact with Alli’s ankle, leaving the Spurs boss unimpressed.

“I’m so pleased for the boys,” Mourinho told Sky Sports. “We can look at the perspective that we were a bit lucky in a couple of situations, they [City] hit the post or they missed a good chance.

“But we can see it from the other perspective and say that we were very, very unlucky that the VAR didn’t decide for a Sterling red card, which is a clear red card.

“From that moment obviously it is a completely different game if you have to play 75 minutes or something like that against 10 men. So 11 v 11, [it was] really difficult, hard, but my boys were very well organised, great effort, great discipline.”

Mourinho also appeared enraged when Sterling took a tumble immediately after Hugo Lloris had kept out Gundogan’s spot-kick, only to avoid a second yellow card for simulation even though VAR ruled he had not been fouled by the goalkeeper.

However, he had high praise for midfielders Giovani Lo Celso and Harry Winks, and goalkeeper Lloris.

“Against City, they love the ball, they know better than anyone to know what to do with the ball, so when they have the ball for the majority of the time it’s hard, but I think [we had] fantastic performances, great concentration,” the Portuguese added.

“The way Lo Celso and Winks, they controlled Kevin De Bruyne, the movements that he does in these areas, and Lo Celso, the way he controls also that position where Sterling comes inside and Gundogan supports them. I think the boys were phenomenal in there, in their effort.

“The goalkeeper saved a penalty – I think it was God’s will because it’s not a penalty – but our goalkeeper is fantastic and he’s there to try and give us points.”

Bergwijn’s wonderful goal saw the new signing from PSV control the ball on his chest before firing home a superb volley on the turn.

“[It was] so sharp, technically so comfortable, chest, volley,” said Mourinho. “[It was] unstoppable, even for a great goalkeeper like Ederson.”