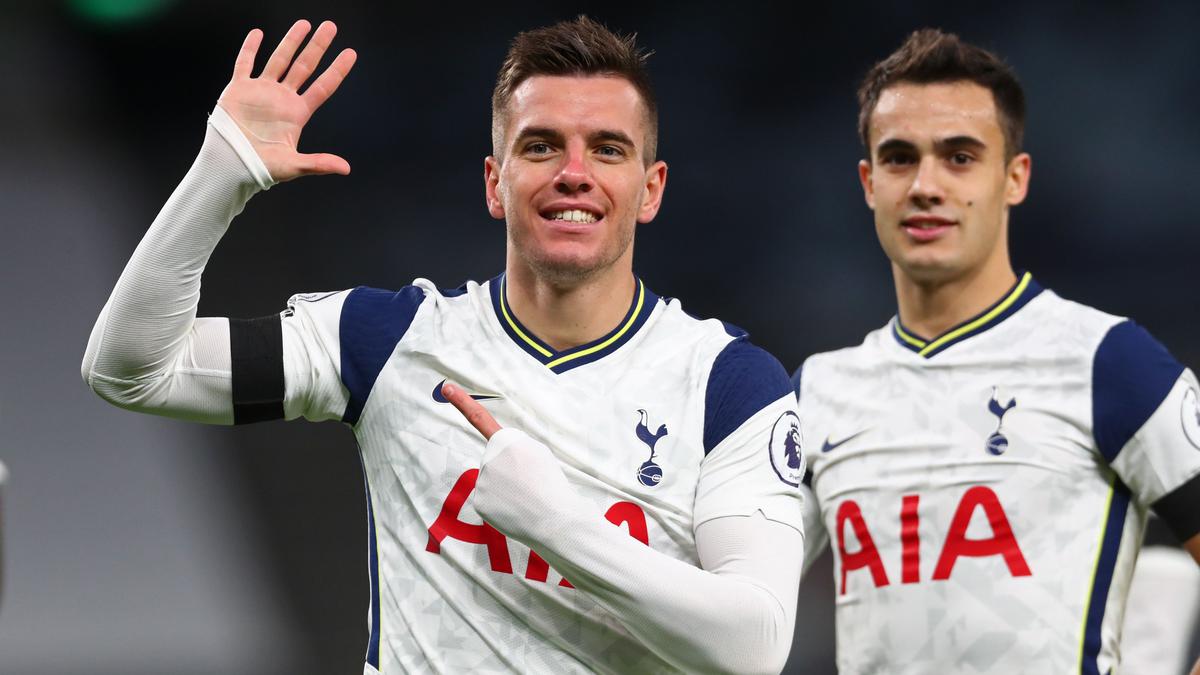 This was the 24th meeting in all competitions between Mourinho and Guardiola. Mourinho’s 11 defeats in these duels are more than he has suffered against any other manager! Guardiola has only beaten Manuel Pellegrini more often, with 12 victories.

90+1′ That’s a sharp save from Lloris. De Bruyne’s free-kick funds Laporte in the box and the Frenchman make a strong header, only for Lloris to produce a remarkable block.

90′ Kane gives away a free-kick and picks up a yellow card for a foul on Dias. Three minutes of added time to be played.

88′ Torres gets a yellow card for bringing Lo Celso down at the edge of the box. Spurs, though, seem in no hurry to further extend their lead.

86′ Unless City win this game late, this will be the worst start to a season that any team managed by Pep Guardiola has made.

85′ The space between two Spurs defenders is so narrow and compact that City are absolutely choked for space. Spurs have been compact and tight throughout, leaving the City forward line plain frustrated.

83′ A silly challenge from Reguillon sees City win a free-kick from a dangerous position. De Bruyne floats a cross in towards Sterling, but the latter fails to make proper contact.

80′ Scratch that, Bale will not be coming on. Alderweireld has pulled up with an injury and Joe Rodon will be replacing him. Rodon, 23, is making is Spurs Premier League debut.

77′ City are in all sorts of trouble now…a little over 10 minutes on the clock and Guardiola’s men have a herculean task ahead of them.

75′ STAT – Harry Kane has provided nine assists in his nine Premier League games this season, more than any other player in the division. Kane had made all of eight assists in his previous three league campaigns combined.

73′ Spurs boss Mourinho makes his second change of the evening as Steven Bergwijn is taken off for Lucas Moura.

68′ Tottenham has the chance to top the table if the scoreboard remains as it is!

66′ GOAL! Lo Celso makes it 2-0 for Spurs. Giovani Lo Celso scores within 35 seconds of coming off the bench to double Spurs’ lead! Kane makes room for himself in midfield and threads a neat pass for Lo Celso on the left. The substitute sets it up with a fine first touch and slots the ball home with his second touch of the game.

35 – Giovani Lo Celso scored just 35 seconds after coming on as a substitute, the quickest goal by a sub in the Premier League since Bernardo Silva vs Brighton in August 2019 (17 seconds). Instant. pic.twitter.com/qEGDj23n3l

65′ First change of the evening – Tanguy Ndombele is replaced by Giovani Lo Celso.

62′ City upping the ante here! Silva plays a delightful ball into the box but Alderweireld does extremely well to deny Mahrez.

56′ Reguilon does well to keep Walker in check but makes a poor that falls kindly to De Bruyne. However, Hojbjerg does well to force the shot over the bar.

51′ De Bruyne receives Rodrigo’s pass and lets one rip from distance, but it whizzes just wide of the post.

46′ And the second half gets underway.

Son Heung-min’s fifth minute strike sees Spurs lead 1-0 at the end of the first half. City has enjoyed the lion’s share of possession and had chances aplenty, 11 shots and three on target to be precise, but its finishing has been poor.

Spurs, on the other hand, has a grand total of one shot, which was Son’s goal.

45′ Moussa Sissoko receives the first booking of the game. Two minutes of added time to be played.

43′ This has become a bit of a pattern now – City pile men forward, create a chance, the shot is either blocked by the Spurs defence or is off target, and the process repeats again.

39′ STAT – Spurs has scored the most first-half goals (11) in the Premier League this season, one more than Manchester City’s season tally so far (10).

35′ The Spurs defence has done a remarkable job so far to keep the City attackers in check. Guardiola’s men have enjoyed their fair share of chances, but are struggling to score past this dogged Spurs defence.

33′ Bergwijn lifts it over the top for Son, but Ederson is quick off his line to collect the ball.

30′ STAT – All of Tanguy Ndombele’s three Premier League assists have come against Manchester City in three different games. The only other player in Premier League history to assist three goals against the same team is Davide Santon vs Chelsea (also three).

28′ EQUALISER! Aymeric Laporte scores from close range to make it 1-1. The goal may be disallowed as the ball struck Jesus on the arm in the build-up. Update – the goal has been cancelled – Spurs leads 1-0.

26′ A fine counter sees Spurs throw men ahead and Bergwijn has a chance to shoot, but Rodrigo tracks back just in time to shoulder check him.

20′ STAT – Son Heung-min has scored five goals in his last five appearances against Man City in all competitions, after striking just one goal in his first six against City for Spurs.

18′ Rodrigo gets on the end of De Bruyne’s free-kick and strikes a powerful header, but it’s a routine save for Lloris.

15′ Both sides have shown signs of brilliance in the opening quarter. Spurs has looked dangerous on the counter while City’s passing game sees it hog the ball. However, City is yet to convert its chances. Torres has been City’s best player of the evening thus far.

13′ TWO-ZERO! Kane finds the back of the net, but he is a a fraction offside. The City defence has looked shaky so far.

10′ Top class move from City. Jesus plays a one-two with Torres to storm into the box but he’s stopped by Alderweireld. The rebound falls to De Bruyne, but he’s ruled offside.

6′ Mourinho must be so relieved with that opening goal…the home side looks lethal on the counter.

5′ GOAL! Son Heung-min scores to give Tottenham Hotspur the lead. What a fantastic start for the home side! A quick free-kick is played to Tanguy Ndombele, who plays a delicate lob for Son. The South Korean is one-on-one with the ‘keeper and beats him with ease to open the scoring.

4′ Kane releases Reguillon down the left and the Spaniard races towards the box, but Walker does well to stop him.

2′ Bright start from City as Torres gets a shot on target right away, but Lloris has it covered.

10:55pm: STAT – Harry Kane has been involved in 23 goals in only 14 matches in all competitions this season, eight more than any other Premier League player. He has 13 goals and 10 assists to his name. The next-highest player on the list is his team-mate Son Heung-min, with 10 goals and five assists.

10:50pm: Ferran Torres has made an impressive start to his Manchester City career, playing in 10 games across competitions and bagging four goals and two assists. Here’s more on his journey from the FIFA U-17 World Cup to The Etihad –
Ferran Torres: ‘Manchester City is here for the Premier League title but it will be difficult’


10:40pm: Tottenham Hotspur cruised to a comfortable 2-0 win the last time it hosted Manchester City. Here’s how that game went down –

10:30pm: Sterling and Aguero have returned from injuries, for City but have been left on the bench by Guardiola. Spurs, on the other hand, has been bolstered by Son Heung-min’s return. Bale is also on the bench for Spurs.

10:10pm: Guardiola has signed a new two-year contract at Manchester City that will keep him in charge until the end of the 2022-23 season. His current five-year stay at City is his longest spell in charge of a club since he began his managerial career in 2008. Here is a collection of his best moments with City –

10pm: This will be the 24th meeting in all competitions between Jose Mourinho and Pep Guardiola. Mourinho’s 10 defeats in those duels are more than he has suffered against any other manager, while Guardiola has only beaten Manuel Pellegrini more often, with 12 victories.

Jose Mourinho’s Tottenham Hotspur, second on the Premier League table, is unbeaten in seven league games. Manchester City on the other hand has endured a poor start to the season, picking up only 12 points from seven league games – the fewest collected by a Pep Guardiola-managed side.

City, which has a game in hand, has surprisingly struggled for goals this season, scoring only one goal in each of its last five league matches.

Mourinho, who took charge at Spurs last November, will hope to celebrate his anniversary with a win over City, which would take the London club provisionally top of the league.

Sergio Aguero and Raheem Sterling are back in training ahead for City, but Nathan Ake and Fernandinho are not ready to return.

“Except for Nathan and Fernandinho, the rest have started to come back,” Guardiola said at his pre-match press conference. “Sergio trained this week. Raheem trained for the first time today with the team,” he added.

Aguero and Fernandinho have been missing since October after suffering injuries against West Ham United and Porto respectively, while Sterling and Ake both picked up problems during the international break.

Meanwhile, Mourinho confirmed that Tottenham’s South Korea winger Son Heung-min had tested negative for COVID-19 and is available for the game but England midfielder Harry Winks is a doubt after picking up a minor injury on international duty.

Steven Bergwijn is available for Spurs, but Matt Doherty is ruled out after testing positive for COVID-19.