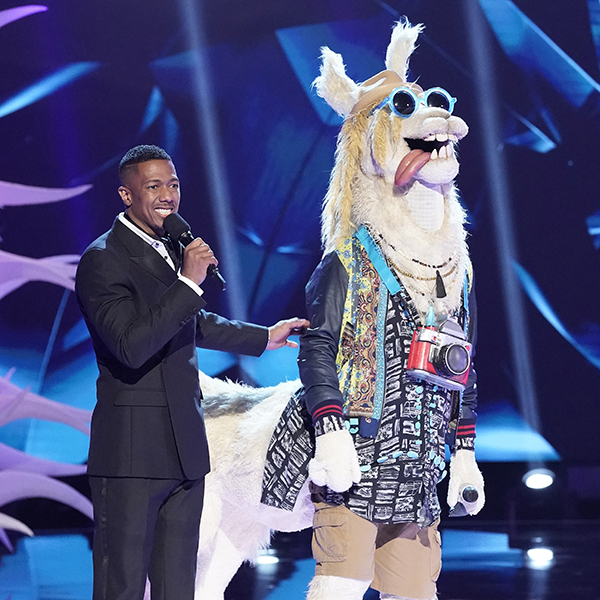 The Masked Singer just unmasked the second singer of season three, and the judges certainly did not see it coming because they didn’t even come close to guessing. Turns out the Llama was none other than Drew Carey, who really loves Seattle, which is why so many of his clues were about Seattle.

His song tonight was “It’s Not Unusual,” and hearing him sing it without the mask, it’s hard to remember a time when that voice didn’t sound exactly, immediately like Drew Carey.

One of Carey’s clues was “spinning my wheels,” which referenced his gig hosting The Price Is Right, and the playing cards were about him winning in the Celebrity Poker Tour. He was also “quick on his feet,” which we assume was a reference to his former job hosting the improv show Whose Line Is It Anyway?

Carey himself explained that when he referenced cannons, it was because he was in the Marine Corps Reserves as a radio operator in a mortar platoon.

He said he did the show because it “looked like a lot of fun,” and he felt like having a goof.

Regular panelists Robin Thicke, Jenny McCarthy, Ken Jeong, and Nicole Scherzinger were joined by Outmatched star Jason Biggs, who actually did some real work with the clues this week. He wasn’t correct about the Llama being Johnny Knoxville, but the effort he put in was appreciated.

Keep up with all the season three contestants below.

The first reveal of the season was the biggest star yet: Lil Wayne!

The Robot had lots of science references, including a periodic table, since he’s had so many records go platinum, but the clues were sort of irrelevant. It’s hard to mistake that voice.

The Llama appears to be a comedian on the radio (23.3 The Wool), and he really likes Seattle. He’s a fan of the movie Ghost?

The panel decided it couldn’t be Howard Stern and guessed David Spade and Joel McHale. The internet immediately went Kelsey Grammar, because of the Seattle of it all, Danny Bonaduce, and Drew Carey. Though David Spade did play a man who turned into a llama in The Emperor’s New Groove…

White Tiger’s not really a singer, at least based on his Vanilla Ice impression and his Marky Mark impression. He’s clearly huge and likely an athlete, and is a “clam shucking” champion, which makes you think of New England. He loves a celebration dance.

He’s definitely got some singing chops, and he took things “step by step” while others crashed and burned. He also grills burgers, and he likes to surf OR he won a Teen Choice Award.

The panel guessed Zac Efron and Jenny McCarthy even guessed her husband, Donnie Wahlberg (because of the burgers), but the internet seems absolutely sure it’s Jesse McCartney, who has multiple Teen Choice surfboards and was in the boyband Dream Street. Could you imagine if it’s Zefron though??

Miss Monster’s got a big ol’ crush on the Monster/T-Pain, and she seems to have struggled with having to look and act a certain way in public. In week two, her clues heavily referenced royalty.

She sounds exactly like Chaka Khan, though some on the internet also hear some Tina Turner. She is not Dolly Parton, as Ken Jeong guessed. Sorry Ken.

The Kangaroo is a tough one! She lost someone close to her, “by her own admission” found herself in the spotlight for the wrong reasons, and now she wants to bounce back. She references her bullies and being a survivor.

A lot of people immediately went for Jordyn Woods, who lost her father recently and then found herself in an unfortunate spotlight, but that voice does NOT sound like Jordyn to us. It also doesn’t sound like Tatyana Ali, one of the panel guesses.

The Masked Singer airs Wednesdays at 8 p.m. on Fox.

Kris Jenner Sobs In Front Of Khloe While Social Distancing In ‘KUWTK’ Trailer: ‘I Miss You’