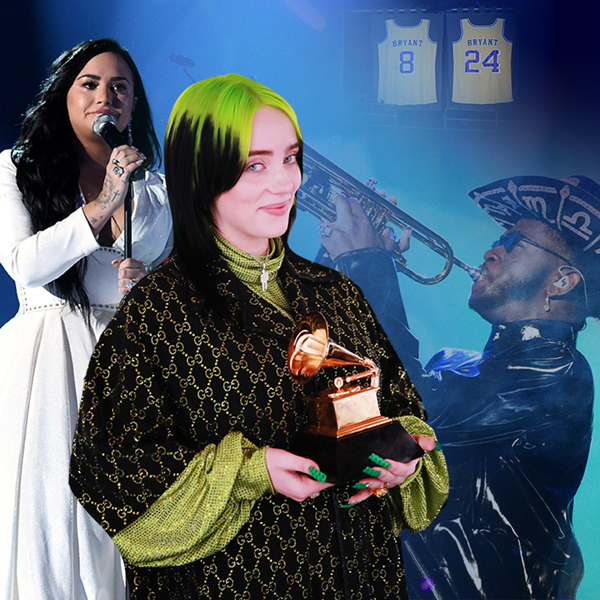 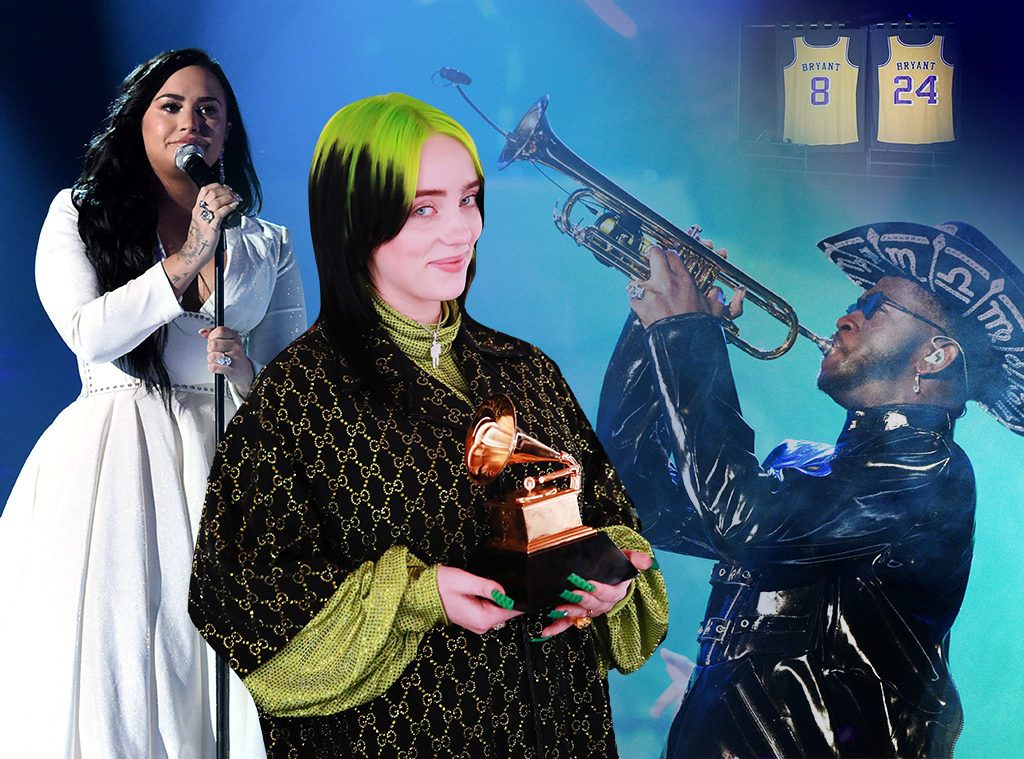 We’re going to say it up top: The most shocking thing that happened Sunday was the death in a helicopter crash of Lakers legend Kobe Bryant, one of the biggest stars in Los Angeles on any given day, no matter who else is in town for awards season.

Just a few hours before the 2020 Grammys red carpet was due to begin, the tragedy turned Staples Center, the sports arena Bryant called home for 20 years, into a shrine and gathering place for crowds of mourning fans, many sporting their No. 8 and No. 24 jerseys in honor of the fallen athlete, who had just retired from basketball in 2016. He scored 60 points in his final game in a Lakers uniform.

“I’m so sad and stunned right now,” John Legend tweeted. “In Staples Arena, where Kobe created so many memories for all of us, preparing to pay tribute to another brilliant man we lost too soon, Nipsey Hussle. Life can be so brutal and senseless sometimes. Hold on to your loved ones. We miss you, Kobe.”

So it was that kind of night.

Despite the inevitable pall cast over the evening—not the first pall that has been cast over music’s biggest night through the years—there were of course moments of joy, celebration and surprises of the pleasant variety.

The ceremony actually started hours before the 62nd Annual Grammy Awards got underway on TV, leaving only nine out of 84 categories to be handed out during the telecast, all the better to pack all those performances into the three-and-a-half-hour show.

As host Alicia Keys said, all the artists in the room were gathered under that roof to do what they do best: express themselves in song, music being “the most healing thing in the world.”

1. Local Girl Makes Good: Billie Eilish, who grew up a short jaunt down the freeway from Staples Center, came in with seven nominations and won six—and can lay claim to only the second sweep ever of the ceremony’s top four categories: Album of the Year for When We All Fall Asleep, Where Do We Go?, Record of the Year and Song of the Year for “Bad Guy,” and Best New Artist.

“Sailing” singer Christopher Cross, of yacht rock fame, is the only other artist to pull off the sweep, back in 1981.

At 18, Eilish is also the youngest artist to win Album of the Year and, making her slew of victories all the sweeter, she shared her Song of the Year and Best Engineered Album, Non-Classical, wins with older brother and co-writer Finneas O’Connell, who was also a winner for Producer of the Year, Non-Classical. (Incidentally, Billie also won Best Pop Vocal Album.)

Since she had to go up three times in a row in fairly quick succession, by the last one, Record of the Year, all Eilish had left was “thank you—goodbye!” And we heart her for that.

2. Cuz We Love Her: “Tonight is for Kobe!” Lizzo exclaimed in kicking off her show-opening performance of “Cuz I Love You” and “Truth Hurts” on what was a sparkling showing for the pop culture queen of the past year. In addition to getting a chance to bust out her flute, as bootylicious ballerinas twirled around her and she traded her dazzling full-length gown for a brightly colored bodysuit, the rapper-singer-songwriter-flautist won three Grammys. She also led the field coming in with eight nominations.

“This is really f–king sick,” a glowing Lizzo said as she accepted for Best Pop Solo Performance, for “Truth Hurts.”

Sometimes the truth feels quite good.

3. Peekaboo!: Ariana Grande changed onstage as her performance segued from “Imagine” into “7 Rings” and “Thank U, Next.” She had to get out of her dress and into lingerie, so she was going to have to do that somewhere, but it was actually kind of adorable—like when you want to get out of your bathing suit at the beach so as not to get sand in the car, and a phalanx of friends hold up towels to shield you.

Which was fitting, since Grande ended up alone on a luxuriously made bed as she took a ring off her finger and put it back in the box, kissing the past goodbye and saying hello to her new love, Ari. And we’re all so good with that.

4. Creating a Moment: Fans and fellow artists may have been ticked off on his behalf that Igor wasn’t up for Album of the Year, but at least Tyler, the Creator‘s LP was named Best Rap Album, and his mom was there—as in, right there next to him onstage—to see him accept his first-ever Grammy.

“One, to my mother, you did a great job raising this guy,” he began. “Two, to the Clancys, my managers [Christian and Kelly Clancy], you guys took a seed and watered it, and I thank you for trusting my ideas. Three,” he added, to the audience, “y’all don’t got to feel obligated to clap all the time.”

And yet, the applause continued.

5. The Road Best Taken: Lil Nas X sure made his first Grammy Awards count, arriving in head-to-toe hot pink Versace that managed to be a little bondage and a little Nudie at the same time, and winning two awards, for Best Music Video and Best Pop Duo/Group Performance. But that was beside the point.

The all-star performance of “Old Town Road” tonight started with him tooling around on his guitar in a living room setting, a No. 24 Bryant jersey resting on a chair next to him. Then he moved to the next room over, where he was joined by the rapping members of BTS. Then, it was on to Diplo playing the banjo and a few bars sung by Walmart yodeler Mason Ramsey. Then Lil Nas X found Billy Ray Cyrus, the other half of “Old Town Road (Remix).”

And then…onto the stage, in a surprise appearance, strolled the man of the hour’s namesake, Big Nas—or just Nas, if you will. He rapped a bit, and then Lil Nas X played the trumpet and now we just want an orchestra featuring his trumpet and Lizzo’s flute in our lives.

6. Demi’s Return: Demi Lovato‘s voice soared and the tears flowed as she belted out “Anyone,” which she wrote shortly before she overdosed in the summer of 2018. It was a hotly anticipated performance, one she did solo, with only a piano for accompaniment, and every note brought her closer to glory. The standing ovation was well-deserved, but we’re guessing everyone cheering would have rather sprinted toward the stage to give her a hug.

“What an unbelievable night,” Lovato shared later on Instagram. “My first time back on stage in almost 2 years. So emotional for me. Thank you all for the love, support and for sharing this moment with me. I love you all.” 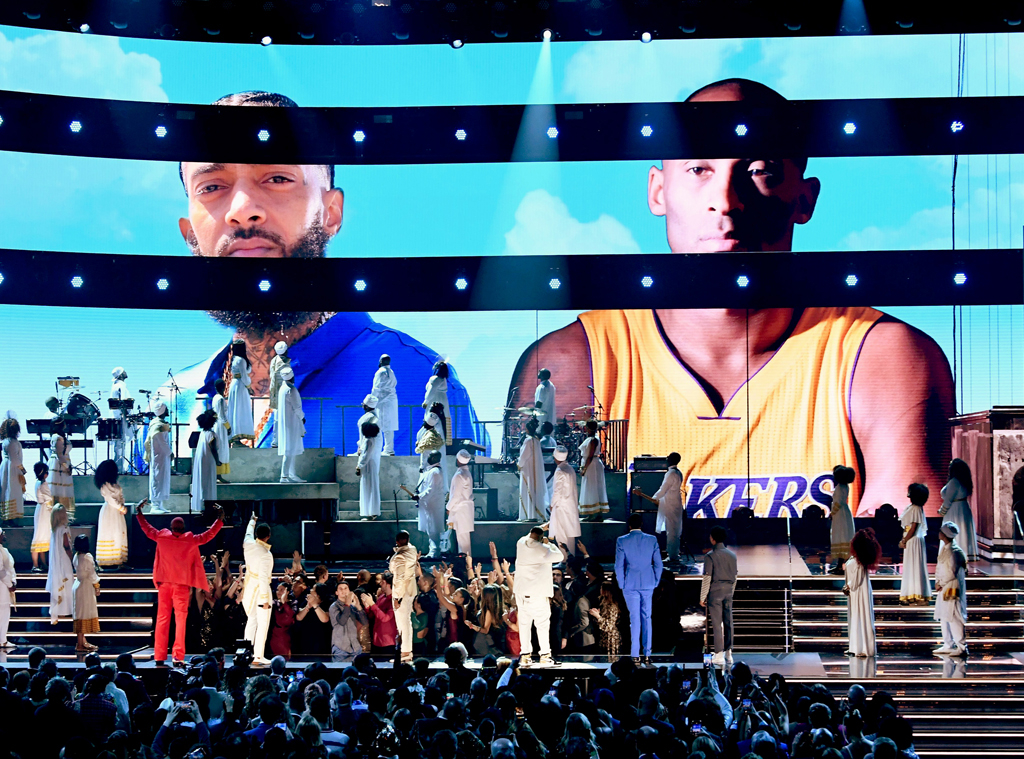 7. Higher Power: You could feel the planned tribute to slain rapper, business owner and community activist Nipsey Hussle expanding to include the extra, fresher pain all were feeling tonight, even before Bryant’s photo was shown alongside Nipsey’s at the end of the performance. John Legend and DJ Khaled were joined by Roddy Ricch, YG, Kirk Franklin, Meek Milland a chorus of voices to inject a little church into the proceedings with a moving rendition of “Higher.” 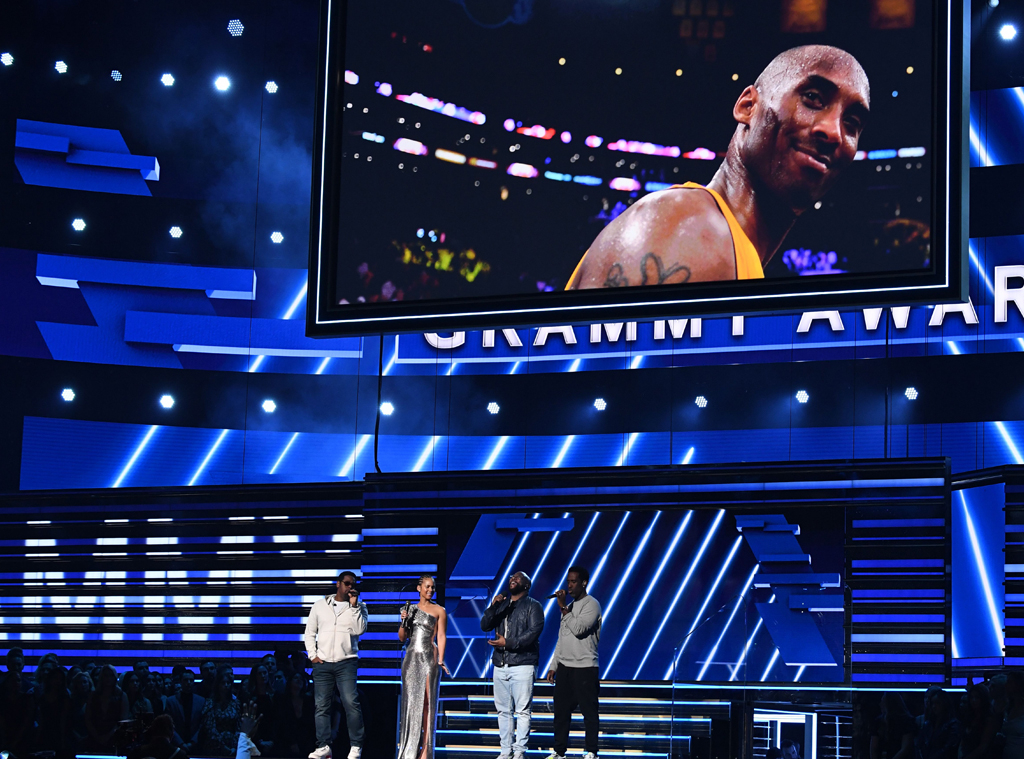 8. Mamba King: As Alicia Keys also said when she first walked onstage: “We never imagined in a million years we’d have to start the show like this.”

She started singing “It’s So Hard to Say Goodbye to Yesterday” a cappella, and was promptly joined by Boyz II Men, who crooned a few more bars of their always heartbreaking 1991 tune. When Keys returned to the stage a few moments later for a piano medley honoring as many artists she could fit into a song set to the tune of Lewis Capaldi‘s “Someone You Loved,” she urged the audience to make it a night of celebration in Kobe’s honor.

And so they did, heavy hearts bursting, putting off the reality of it all for just a few hours more, so long as the music kept going. 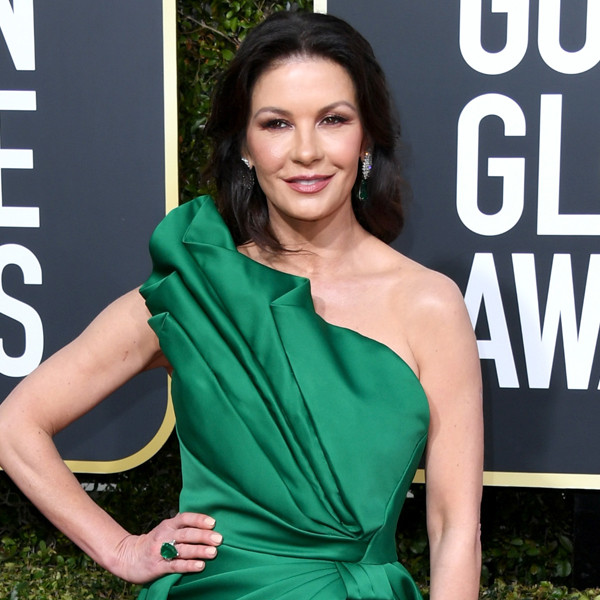 Catherine Zeta-Jones Is Coming Out With Her Own Goop-Inspired Lifestyle Brand – E! Online