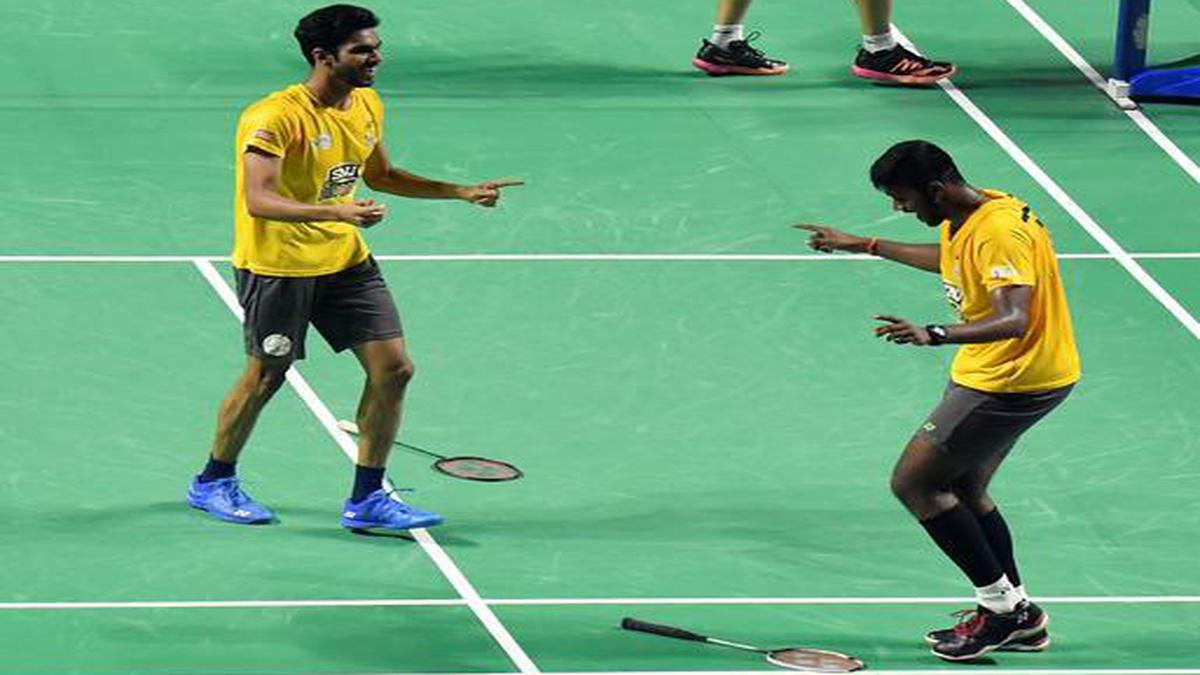 14-15 Satwik and Pugh beat two former World No 1s. This is delightful. Pugh, especially. Satwik’s back with his dance; his foot isn’t bothering him now!

12-14 Pugh smashes into Pedersen’s body to set up the matchpoint for Chennai.

11-13 Pugh does her magic with the serve again! Sung Hyun couldn’t get to it.

10-11 Service fault from Satwik; this is the second time he has done this.

7-10 Satwik plays it with soft hands this time, as Chennai pockets a point again.

5-8 Chennai carries the lead into the midbreak, as Satwik dispatches a monstrous cross-court smash.

4-7 Sung Hyun works one away to the opposite flank after Satwik and Pugh shift to the right.

3-5 Sung Hyun pounces on an opportunity but it goes wide again.

15-13 We will have a decider after Pugh pushes one long.

OH NO! Satwik has gone down after getting a sprain again. Concerned look everywhere as the physio applies the magic spray.

6-9 Satwik packs a punch! His return hits Pedersen on the body. He apologises, but that’ll be a point in favour of Chennai.

4-6 Two errors in succession from Satwik gives Awadhe a spring in its step.

1-4 First point in the second game for Pedersen and Sung Hyun as the former’s return lands just on the line of the right alley.

11-14 What a serve from Pugh! Pedersen looks perplexed. She didn’t even have time to react to that.

8-12 Incredible shot! Satwik plays a shot at the net which flies past Pedersen. Sung Hyun reacts in time to leap up and dispatch a wonderful smash at the other end. Satwik gets the net.

6-10 Satwik makes an error again, as he nets his return.

3-4 Pugh! Wow! Satwik’s smashes are vicious, it is said. Pugh retorts. “Wait up. Watch this!” She rains down an unplayable, thundering return down the middle.

2-2 Satwik takes the pace off that shot and Pedersen gets it on the wood as the bird crashes in her own court.

13-5 Zhang cruising her way through the game now. The American is just two points away now after Gayatri sends one out of bounds.

7-5 Gayatri comes with a nice cross-court smash from the backcourt and Zhang’s return finds the net.

4-2 Gopichand had taken a game off Tai Tzu Ying, not too long ago, but the errors are creeping up here again. She flicks one in straight and Gayatri’s return gets trapped in the net.

15-10 After leading 8-7 on the spin, Zhang turns the tide in her favour, pocketing Game 1, after Gayatri misfires one wide again.

13-9 Gayatri’s service returns have been found wanting since the midgame break. Out again!

10-8 Oh so unlucky! Gayatri losing her focus a bit gifting her opponent points in form of unforced errors. You hand a seasoned shuttler like Zhang these points, and she will find her rhythm back. She cannot afford to do that.

8-7 Gayatri takes the lead into the break. This has been a fabulous show from the 16-year-old.

5-7 Gayatri maintains the lead after Zhang pushes long enough for the birdie to fly out of play.

3-5 Gayatri mixing it all up: the drop, the lift, the smash. She has everything! She pulls back and launches a drive which just misses the net. Zhang lunges forward to get to it, but she finds the net.

0-3 Gopichand bags the first three points and since she is playing in Hyderabad, the home support is unbelievable. She is going up against a seasoned Zhang and this isn’t going to be an easy contest.

8-15 And Chennai Superstarz bag the trump points, in what can be called a more-or-less one-sided contest. Sugiarto was absolutely in control right throughout the match. He also remains undefeated in the league.

7-13 Excellent placement from Sugiarto, who neatly gets a smash just within the alley line!

6-11 Neat judgment from Vincent at the end gives the shuttler a point. But is it too late now?

2-6 An unforced error from Sugiarto gives Vincent a break.

1-3: Sugiarto once again takes an early two-point lead. This time though, he’s done it with some crisp smashes. Vincent is getting wrongfooted very easily.

10-15 SUGIARTO SEALS THE FIRST GAME 15-10! Vincent with some more errors in the end to concede the game.

9-13 Some quick points for Chennai’s Sugiarto here. The calm and composed Indonesian is getting the better of his opponent from Awadhe Warriors.

6-9 CHALLENGE UNSUCCESSFUL FOR SUGIARTO! Great judgement from Vincent. Pretty close now. Vincent is going on the defensive as well.

5-8 Sugiarto beginning to break away once again. He’s still defensive but his placements have been spot-on so far. Vincent, on the other hand, is trying too hard and ending up with some loose shots.

4-6 Vincent is finally getting his act together. He has executed some wonderful down-the-line smashes here.

2-5 Few more unforced errors from the Awadhe Warriors shuttler. The unbeaten Tommy Sugiarto has started off this match in bright fashion.

1-3 Tommy Sugiarto has adopted a defensive approach here. He’s allowing Vincent do all the hard hitting and capitalising on the mishits.

15-10 THE AWADHE WARRIORS PAIR WINS!! And the team takes the lead in this tie against Chennai with two points from its trump match. Has Satwik picked up another ankle injury? Looks so. Wonderful performance from all four shuttlers.

14-10 Sozonov you beauty! He’s given his side the match point now with beautiful net play. Sung Hyun buried the points with smashes. Satwik looks to be in a bit of trouble.

11-7 A slow and steady fightback from Chennai here. The Awadhe pair kind of switched off here. Satwik and Dhruv are going on an all-out attack with aggressive smashes.

8-4 The Chennai Superstarz duo has let it slip here. Satwik and Dhruv are hitting easy returns long and Sung Hyun and Sozonov are benefiting from this.

15-11 And there will be a deciding third game after Dhruv finds the net, yet again.

14-11 The second game is still alive as Satwik sends in a scorcher down the middle again. But how long can they keep it going?

13-8 A 24-shot rally comes to an end as Ivan pulls off a tactical move to send one further down after luring both Satwik and Dhruv up front. Dhruv saunters back but sends it wide off court.

11-6 Chennai restricts the rallies to the right flank before Dhruv swings wide. Ivan loses control of his shot and finds the net.

8-4 Chennai picks up the first point post the midgame break as Dhruv swings wildly down the middle.

7-3 The Warriors are running away with Game 2 now. What will Satwik and Dhruv do to turn things around here?

2-3 Dhruv, you beauty! He is thinking on his feet here. He meets what would have been a hairpin net shot with a beautiful backhand just above the net to rain it down on the forecourt. By the way, it is a very noisy crowd here in Hyderabad!

1-1 381 kph! Gets the angle, gets the power, gets the speed – Satwik with the hammer! He gets it down the middle and neither Sung Hyun nor Ivan had any answers to that.

12-15 After Lakshya, Satwik and Kapila are inching towards another win. Game 1 is theirs to take.

12-13 Lucky! Kapila, who sends one towards the backcourt just makes it within the baseline.

11-13 Sung Hyun gifts a point to Chennai after sending one high above Kapila’s head.

9-8 Awadhe’s Ivan cuts in a backhand. Satwik pushes it straight and Sung Hyun picks it up only to smash it at Satwik’s face. He ducks.

7-7 Satwiksairaj is frustrated after his return crashes against the net again. He turns back and looks at the coach as if to question, ‘How?‘

5-5 Well… well… well… they are not PBL’s most successful men’s doubles pair for nothing. Sung Hyun reaches out to his left and uses his backhand to perfection to send in an unplayable drive.

2-4 Satwiksairaj’s backhand finds the tape after Ivan pushes one just along the line of the net.

0-2 Ivan dives to his left to pick up a smash from Kapila. But no, doesn’t get that to drop within the court. OUT!

8-15 And there it is! Subhankar is furious with himself. The Superstarz are on their feet. Subhankar gets on the attack and hits it high and long… Too long and out. A confident Lakshya smiles and watches it go.

7-13 Lakshya gifts a point. The seven-point cushion ahead of this rally sees him experiment with a net shot. He ends up swiping the shuttle below the net.

6-12 351 kph now! Another powerful smash at the net sees Subhankar falter and hit it back at the net.

5-8 Oh unlucky! Lakshya, trying to confuse Subhankar, plays it really low and slow but he himself loses control of the shot as the shuttle almost crashes against the umpire’s chair.

3-6 What a pickup from Lakshya! He just gets to cut one just off the net and Subhankar at the other end didn’t expect that return at all.

3-4 A beauty! Subhankar wouldn’t have expected that 382 kph scorcher from the young lad. Now, Lakshya is getting Subhankar to run all around the court. A quick return from Subhankar at the right sees Lakshya jump up to smash left.

1-1 Good judgement from Subhankar who ambles back but lets the bird float out, beyond the baseline.

6-15 And Lakshya takes Game 1. Didn’t take much, to be honest. A vicious backhand from the youngster settles the issue.

5-14 Wow! Lakshya draws Subhankar close to the net before slamming one down further away towards the baseline. Only the game point now!

5-10 A change in attitude from Lakshya, who after the midbreak, has switched to a more attacking front. Provides himself the required elevation to smash one into the forecourt region. Subhankar isn’t able to get to it.

5-8 Subhankar is quick on his feet but Lakshya is warming up into this tie delightfully. Lakshya gets close to the net and unleashes a drive. Subhankar gets under it but it crashes into the net.

5-3 Subhankar forces Lakshya into commiting an error. Just opens the face of his racket. Lakshya could do nothing about it.

3-3 Lakshya adopting a defensive approach here. Subhankar races to the net to flick one to the right. Lakshya, cool and composed, puts it away easily.

1-0 Awadhe to serve and straightaway Subhankar runs away with the first point. Judges the height of the shuttle, gets on the backfoot and works away a powerful blow to the left flank. Lakshya just manages to get the wood on it.

Chennai Superstarz will be keen to get back to winning ways after tasting its first loss of the season against Pune 7 Aces, when it meets Awadhe Warriors which will open its final leg in Saturday’s second match. The team would be looking up to Satwik to show the conviction he had begun the fifth season with.

The Thailand Open champion suffered his first men’s doubles defeat in three outings and would be hungry for a win and so will the young Lakshya Sen, who is also coming from his first loss of the season. Kirsty Gilmour’s form would also be crucial for Chennai.

The Beiwen Zhang-led Awadhe Warriors put up an impressive performance in their final match in Lucknow, inflicting a 5-0 win over Mumbai Rockets. Wong Wing Ki Vincent sizzled in both the matches the side played at home while Subhankar Dey and Ajay Jayaram have both contributed wins for the team so far.

“Finishing the home leg with a big win boosted our confidence and we are keen to continue that form against table toppers Chennai. It will not be easy but we are ready for the challenge,” said Dey.

Awadhe’s world No. 24 men’s doubles pair of Ko Sung Hyun and Shin Baek Cheol are yet to lose and they could be the difference-maker as the Lucknow-based franchise aims for its third win in four ties.

Vaani Kapoor shares a BTS picture from the sets of ‘Chandigarh Kare Aashiqui’ with her ‘stellar creator’ Abhishek Kapoor; check it out – Times of India