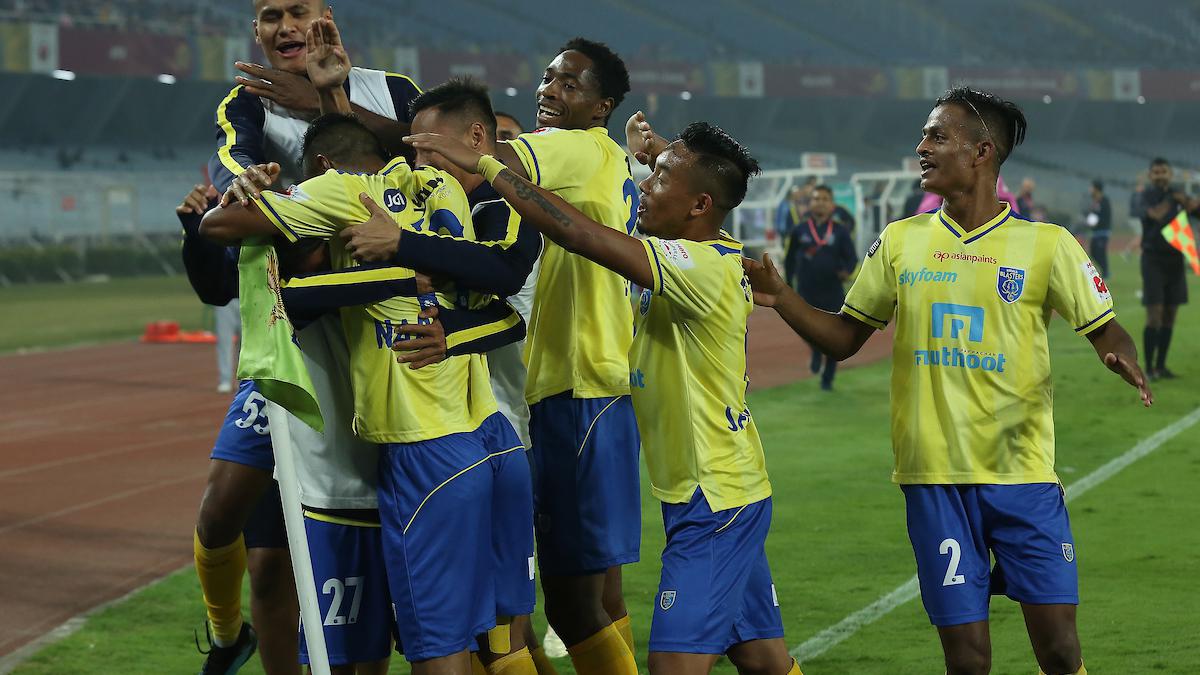 45+1′ MAKE THAT THREE. WHAT IS HAPPENING HERE IN KOCHI? Crivellaro this time, nets his second of the night. Three Chennaiyin players run down the field towards the Kerala goalmouth. Thapa and Valskis (and even Edwin) seem to be backing him up in a line, approaching the keeper. Crivellaro has the ball and he runs down a little shakily finishing a left footed shot into the left corner.

45′ GOAAAAL. One more. Goal #199 of the season. Crivellaro assists this time with Valskis netting the goal this time. Valskis passes to Crivellaro who runs down facing the Blasters attack. He makes a pass just in time, before falling to the ground. Valskis is there to take the pass and he runs down and shoots it in for the second goal of the night for the visitor. Too easy for both these men here.

Chennaiyin on track for its first win here in Kochi since 2014.

STAT: Kerala: Most points won after falling behind (7). Good stat when you’re in this position but this was avoidable. I do not want to be Rehenesh at the moment and he must be thanking his stars Schattorie is safely tucked away in the stands for this one. We see Schattorie texting. Even he can’t bear to watch this.

39′ GOAAAAAL. Painful from Rehenesh here. Crivellaro has to do close to nothing to get that goal. He runs down and Rehenesh is right up the box. Too easy for Crivellaro here as he softly puts one past the keeper to give Chennaiyin the opener. Did I jinx it with the clean sheet stat?

36′ FOUL. Oh my. Thapa is down, nudge again from Cido this time. His foot gets stuck on the turf and he has twisted his leg. That looks painful.

36′ A curling kick is too high to help anyone in the box and the ball is put away to the midfield. Crivellaro gets it and begins to sprint with it but Messi Bouli will not have it. Tackles the man. That should give Chennaiyin a concession.

35′ Advantage to Kerala here as Kerala gets a corner kick. Chennaiyin has conceded quite a bit from set pieces so let’s see where this takes us.

Kerala has only kept two clean sheets this season. It has kept one so far tonight as well. Will that change?

28′ Zuiverloon stands his ground and Crivellaro is not relenting. He tries to dribble around the man but that’s not going to possible. It gives Kerala enough time to rally around Zuiverloon but Crivellaro can’t dribble past him. He stands there like a man mountain and Crivellaro crashes straight into him. Rehenesh collects the ball and Crivellaro is down on his back, ruing a missed opportunity.

The broadcasters are discussing who their favourite player whose name begins with a ‘Z’ is – a conversation stemming from Zuiverloon’s tricks in the midfield. One of them suggests Zidane. I wonder what Zlatan would say, should he ever be privy to this chat!

Top distances today: Edwin: 2.9km, Cido and Seityasen come in next, with Chhangte and Crivellaro rounding off that top five list for the game so far.

21′ Oh. Messi Bouli gets the ball from the midfield and runs down, Ogbeche is waiting. But there’s a player in white (Jerry I think) whose got a good grip of Ogbeche’s shirt and Ogbeche is standing there, livid, while Vishal Kaith collects the ball. The referee has not seen it, neither has his assistant. The crowd is on its feet too here in Kochi.

STAT: Here’s where the teams stand for now. Chennaiyin is sixth with 18 points while Kerala is eighth with 14 points.

20′ Crivellaro has managed to send in a through ball to Chhangte again but Rehenesh has done well to slide into the Chennaiyin attack and dispatch that to safety.

19′ Thapa could have played that better. Chhangte manages the steal the ball from the Blasters by the flanks but a lot of hesitation from the men in white and some slick defending sees a potential goal threat nipped in the bud.

16′ The previous passage of play has helped the ball find its way to Kerala’s half and Valskis gets to work almost immediately and we see an effort here from the Lithuanian that flies over the post.  That would have been a nice header had that made it into the net.

15′ Man down and it’s Thapa. Seityasen Singh looks like he’s brought Thapa down. But that’s not a foul. Ogbeche is determined to convince the referee. Replays show one of the most gentle touches possible. No harm done for the host.

STAT: 61% possession to Kerala. Chennaiyin doesn’t seem to mind. The boys in white have a plan.

The first 10 minutes have been played in Chennaiyin’s half. Good half for Kerala. Pressing football.

11′  Lucian Goian has been in the thick of things for the last few minutes here. But Messi Bouli gets a foot on the ball and shoots it down to Zuiverloon, a defender no less, who fires one just over the Chennaiyin goal. A collective ‘ooohhh’ is the response. Schattorie is watching from the stands. The emotions aren’t on display just yet.

8′ Messi Bouli is taking the game to the opponent, getting going over to the goalmouth with some good pace there. Can’t make anything of it though.

7′ Much of the action is concentrated in the midfield at the moment.

Sandesh Jhingan is watching this game from the stands. He’s posted a video of getting a few kicks in during a training session. Good sign that for the man. Unfortunate that we don’t have him out there this season.

Transfer window excitement isn’t just for Europe folks. We’ve had an interesting signing in the Blasters’ camp as well. East Bengal’s Ronaldo Oliviera is expected to come in for the Blasters. Imagine that team sheet! Messi, Ronaldo coming out in similar silks.

3′ It’s been an active start here from both teams. Valskis is quite clearly the fulcrum of the Chennaiyin attack. Messi Bouli and Ogbeche are trying to pair up for the Blasters.

Time for the national anthem. Chennaiyin in white. Kerala in Yellow.

An hour to go for LIVE action and we have loads to discuss ahead of game. This is a southern derby and fierce rivalry unfolding in the backyard of a team that has some of the most passionate fans in the country. My colleague Aashin once told me about a friend of his who felt the floor of the stadium shake when the Blasters were being cheered on by the Manjapada. Let’s see if there’s reason for some earth-shattering jubilation today too.

The biggest development from the league overnight is that FC Goa, the team currently on top of the table, has sacked manager Sergio Lobera and appointed Derrick Pereira, the coach of the club’s reserve side, on an interim basis until the end of the season. Read full story here.

When Owen Coyle took over as Chennaiyin FC’s new coach early last month, his team was tottering at the bottom of the Hero Indian Super League.

Now, Chennaiyin (sixth spot, 18 points) is on a three-match winning streak, has set itself a top-four goal, and is bubbling with confidence as it gets ready to take on Kerala Blasters at the Nehru Stadium here on Saturday.

But despite winning its previous encounter 3-1, Coyle expects the Blasters to be a tough opponent. “Kerala will have to win, we also have to win for our aspirations, so I think you will see two very attack-minded teams tomorrow night. It should be a terrific game of football,” said the 53-year-old.

“Both teams have terrific attackers, Messi Bouli and Ogbeche for them. We are well aware of their threat. We have to be respectful but we also know that if we are at our best, we can win.”

The visitor’s Lithuanian striker Nerijus Valskis is this season’s top goal-getter with 10 goals and he will be the man to watch.

Coyle explained how he turned Chennaiyin around. “Part of any head coach’s job is to believe in his players. I told them, ‘you can’t score off every chance you get’. I had a career as a striker, scored 300 goals, but I probably missed even more but I was never afraid to miss,” said the Scot.

“I told them, it’s fine if you miss, you can go back and do that again. So, they know they have my trust.”

Meanwhile, Blasters assistant coach Isfaq Ahmed feels that his team (eighth, 14 points) could still make the semifinal. “Anybody can mathematically make it. You’ve seen Odisha winning four matches in a row, they grabbed the fourth spot. It’s just the momentum,” he said.

“We were also very much behind, but when we won two matches in a row, everybody expected us to grab the fourth spot. Any team behind the top three can qualify, if you win two in a row, you are there.”

The match will be streamed live on Hotstar and Star Sports network from 7.30 pm. 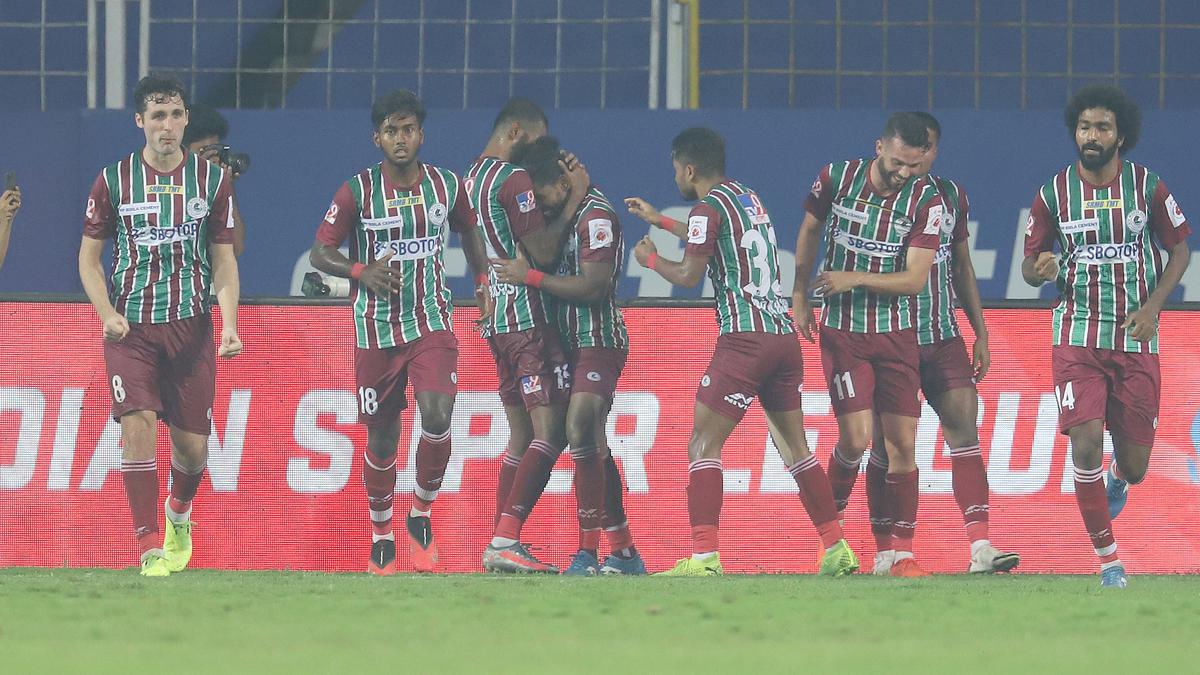