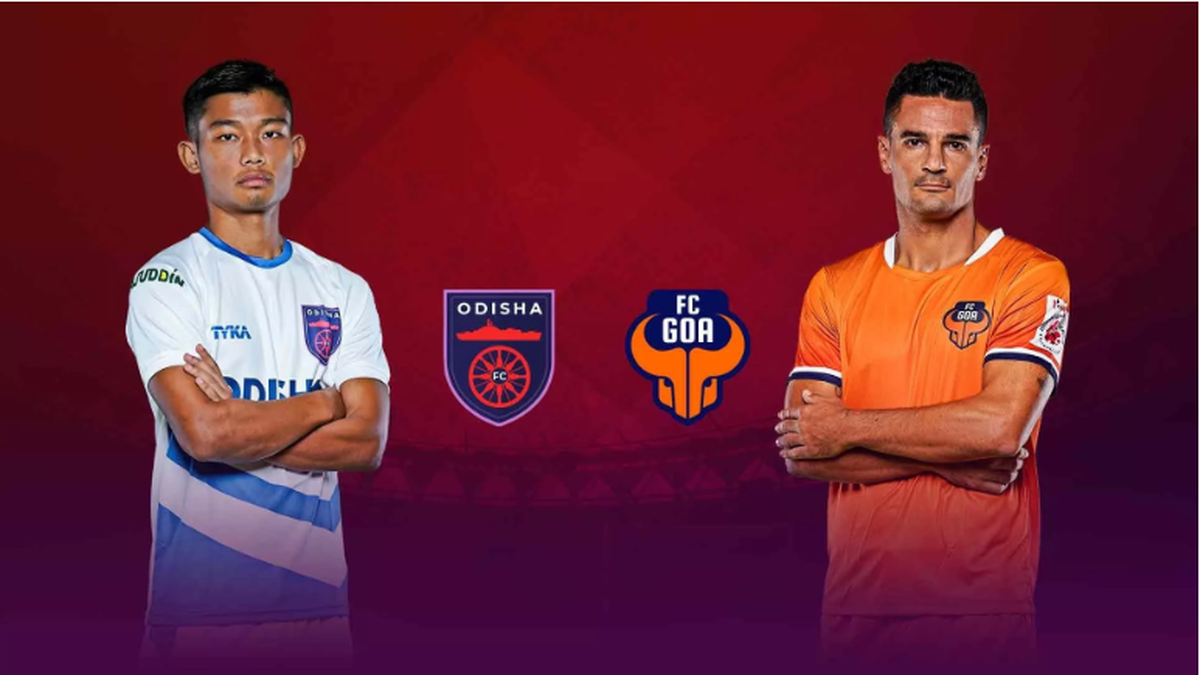 87′ CORNER FOR ODISHA!!! THIS WAS A GOOD CHANCE! Jerry made a good run from the right flank and he passed the ball to Xisco who tried to go for a left-footed curler but Fall blocks it away just in time.

83′ YELLOW CARD!!! This one goes to a Goa player. Hugo Boumous is booked by the referee for a harsh tackle on Sajid of Odisha FC.

82′ CORNER FOR GOA!! Both Edu Bedia and Brandon Fernandes were keen to take free-kick there. Edu took it in the end. His shot was deflected off Odisha’s Diagne for another FC Goa set-piece.

79′ YELLOW CARD!!!! Sajid of Odisha FC is booked for an elbow on Ferran Corominas of FC Goa. Free-kick for the away side now.

76′ INJURY!!! During an Odisha corner Xisco Hernandez lost balance and fell. On his way down, he hit Goa substitute Manvir Singh’s knee. He looks to be in a lot of pain. The medics make their way on to the field.

73′ THROW-IN FOR ODISHA!!! A poor goalkick from Nawaz led to this. The other Goan outfield players are also feeling the heat now. This is Odisha’s best chance to equalise. An interesting last 20 minutes ahead.

69′ CORNER FOR GOA!! Brandon Fernandes will take it and he finds Carlos Pena in the box. However, Pena’s header is straight at Dorronsoro.

65′ IT’S 3-2 NOW!!! GAME ON! ONWU COMPLETES HIS BRACE!!!!! It was an Odisha corner and Onwu rose the highest to get good contact on the ball. Fall’s deflection helped it on its way past Goa keeper Nawaz. We’ve got a game on our hands, ladies and gentlemen!

64′ SUBSTITUTION!!! Goa manager Sergio Lobera makes the first change of the night as he brings in Manvir Singh for the man with the brace – Jackichand Singh.

62′ BRILLIANT SAVE BY DORRONSORO!!! It wasn’t just one but two. He denied both Coro and Boumous opportunities to increase Goa’s lead.

59′ AND IT’S 3-1!!! THE FIGHT IS ON!! ONWU OPENS HIS ACCOUNT FOR ODISHA! It was a delightful left-footed cross from the left wing by Narayan Das and Manuel Onwu came up with a wonderful header to reduce the deficit for his team.

57′ Edu Bedia is down again. This time Onwu brings him down. That one kind of looked like a dangerous tackle but no card from the referee. The Goa physio comes out to treat his player.

54′ FOUL!!! Vinit Rai brings down Edu Bedia of Goa from behind. Edu has lost a boot in the process as well. It’s a free-kick for the visitor.

51′ CHANCE!!! Jackichand Singh with a good move forward but his cross attempt doesn’t come out well as the ball lands into waiting arms of Odisha shotstopper Dorronsoro.

48′ Diawandou Diagne with a fierce run forward but Mandar Rao Dessai intercepts him with a well-executed sliding tackle. Throw-in for Odisha FC.

A Jackichand Singh double and a Vinit Rai own goal give FC Goa a well-deserved 3-0 lead over Odisha FC heading into the break. However, this match could have been much different if Jacki’s first goal had been rightly ruled offside.

There were two more contentious calls – Onwu’s goal which was disallowed due to offside and Goa defender Mourtada Fall’s handball which could have resulted in an Odisha penalty – which could have kept the home team in this game.

But remember Chennaiyin FC almost made a comeback from 0-3 down against Goa in the first half, earlier this season. So you never know. Forty-five minutes to go. Stay Tuned!

45+2′ FREE-KICK FOR ODISHA!! Xisco Hernandez will take it. It falls to Daniel who gets a header away. Martin Perez manages to collect the ball close to the far post. However, his shot misses the target by a whisker.

45′ Two minutes to be added on! And Goa wins another corner. It’s another poor one. The Odisha defence clears it away.

43′ Six corners and seven goal attempts for Goa tonight, while Odisha hasn’t won any corner so far and has managed only one shot on target. The visitor also has a whopping 70% possession in the first half.

40′ The home side Odisha has experienced a decent last ten minutes. If they can pull one back before half time, they might have a chance. Goa looks lethal in all departments in this encounter and one more goal will most likely seal the game for it.

37′ Odisha has been punished for its poor positioning tonight. Bora and Sajid are rushing forward a little too often. Most others are not tracking back at all. Gombau looks to be missing his go-to-men Shubham Sarangi and Nandha Kumar this game.

33′ OFFSIDE!!! That was some wonderful work from Onwu but the linesman raises his flag. However, replays show that the Odisha forward was perfectly fine there. This goal could have made a difference by instilling some confidence in the home team. Brilliant dummy from Xisco as well.

29′ Goa has been playing some extremely positive football here. Jackichand with another chance as he receives another pass from Boumous. But his finish is very poor.

26′ IT BECOMES 3-0 NOW!!!!! JACKICHAND WITH A BRACE! Goa’s Boumous with a brilliant run on the left flank and an even better low cross into the box. Jackichand timed his run to perfection and taped the ball past Dorronsoro. Odisha coach Gombau can’t believe what he’s watching.

24′ 2-0!!!! BUT WAS THAT OFFSIDE!! NO GOAL GIVEN! Mandar Rao Dessai evaded a few Odisha players to get into a good position to cross. He found Jackichand who took an one touch shot at goal. However, it looked as though Corominas blocked the keeper’s view as the ball went into goal. But the referee and linesman decide to award Goa the goal.

21′ GOALLLLL AND IT’S 1-0!!!!! FC GOA OPENS THE SCORING THROUGH EDU BEDIA!!! Poor stuff from Odisha. They conceded a silly free-kick to begin with. Edu took it from a pretty promising position. His shot was deflected off Vinit Rai towards the back of the net. Think this is a an own goal as the ball wasn’t goal bound. Dorronsoro was completely wrongfooted here. OWN GOAL!

18′ Corominas is still looking for his 50th goal in all competitions for FC Goa. The Odisha FC defence has frustrated him so far.

15′ CHANCE FOR ODISHA! Sajid with a good run forward. He finds Jerry with a delicate pass. However, Jerry is unable to find Onwu in the middle. That was close!

12′ Goa has wasted several glorious opportunities already in the first 10 minutes. These might come back to haunt them sometime soon.

9′ ANOTHER CORNER!!! A different routine from the visitor here, shot pass to Brandon Fernandes and the cross falls to Boumous who somehow gets a shot away. CLOSE!!! But his final shot is deflected off Sajid.

8′ CORNER FOR FCG! Boumous to Coro in the middle but Gaurav Bora makes a last ditch tackle. However, he’s unable to stop the set-piece.

5′ SHOT!! Edu Bedia takes a shot from long. But due to lack of power it doesn’t trouble the keeper. The Goa players are looking confident on the ball. They are already making a lot of moves into the box.

3′ Odisha FC will definitely miss Aridane Santana, who had bagged nine goals and two assists this season, tonight. We’ll have to wait and watch if Onwu can emulate him.

AND THE MATCH BEGINS!

The match will begin in a few moments.

The players are out!

Odisha FC will look to maintain its unbeaten record at the Kalinga Stadium when it hosts FC Goa in the Indian Super League (ISL 2019-20) on Wednesday.

Josep Gombau’s side saw its four-match winning streak come to an end when it lost 3-0 to Bengaluru FC last week. The club has since signed striker Manuel Onwu on-loan from Bengaluru after top-scorer Aridane Santana was ruled out for the remainder of the ISL 2019-20 season.

Odisha FC is fourth on the table and a win would further help consolidate its position as the ISL 2019-20 season enters the business end. Interestingly, Odisha FC is yet to score a goal in four matches against the top three teams, namely ATK, FC Goa and Bengaluru FC.

Speaking ahead of the game, Gombau said: “Goa is a top team, one of the best teams in the league. We know very well how they play. Every single game we play, we have our own style. But also depending on the opponents, we do change a few things. We have practiced this week and I think the boys are ready.”

On the other hand, Goa has suffered two defeats in its last two matches away from home. The onus will be on Hugo Boumous, who has scored six and assisted four this season. Edu Bedia is also expected to feature, which would mean more creativity for the visitor in the middle of the park.

With 14 goals, Goa has been the most prolific when it comes to scoring away from home and has a tendency to up the ante in the second half, having netted 16 goals.

“This season is very difficult and very competitive with all teams wanting to win. For us, it’s a big challenge and hopefully we can get the first spot and win the ISL. So we are working in this direction,” said FC Goa coach Sergio Lobera.

Goa will be eager to claim all three points as it can’t afford to drop points at this stage with ATK leading the table on a better head-to-head count and Bengaluru FC trailing by just two points.

Odisha will be without Marcos Tebar who is likely to miss the tie due to injury, while Shubham Sarangi and Carlos Delgado are suspended due to accumulation of four yellow cards. Meanwhile, Goa will miss the services of midfielder Ahmed Jahouh.