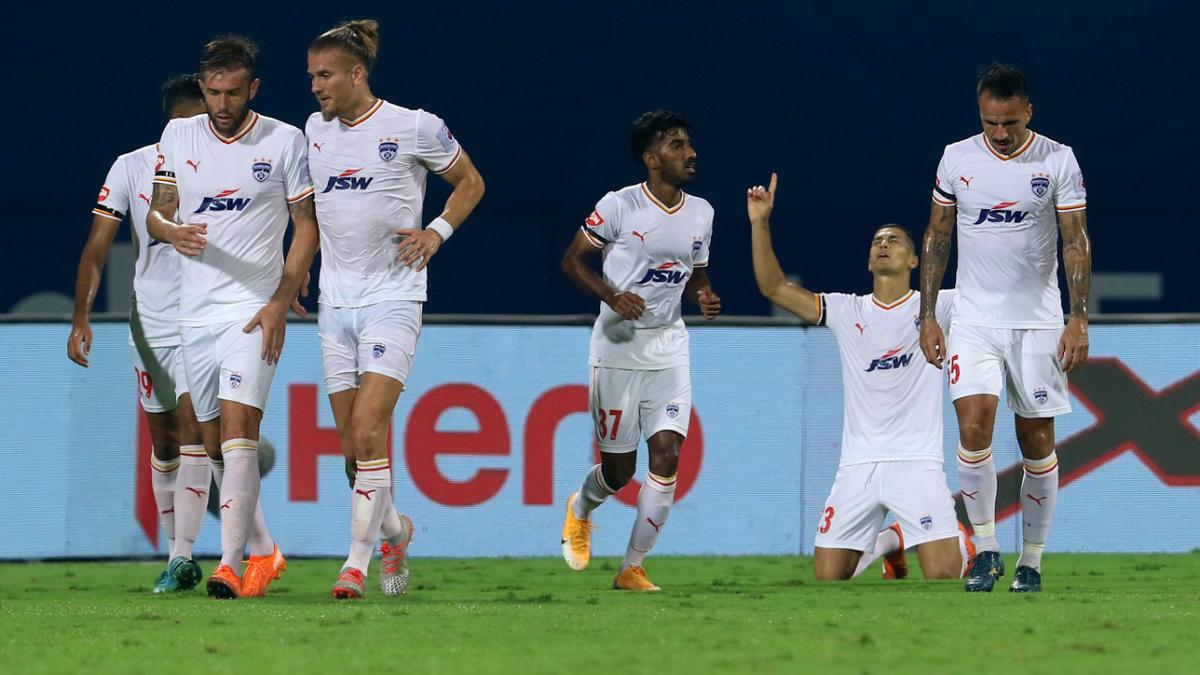 Welcome to Sportstar’s live coverage of the ISL 2020-21 game between Kerala Blasters FC and Bengaluru FC in Goa on Wednesday.

Despite Bengaluru FC’s 1-0 lead in the first half, Kerala Blasters FC, with an overall possession of 48 per cent, has put up a tough fight in match 65 of the 2020-21 ISL on Wednesday.   –  ISL/SPORTZPICS

45′ Two minutes of stoppage time to be added on at the end of the first half! Albino Gomes makes a good save after Sunil Chhetri smashes the ball towards the near post from close range. This could have easily become 2-0 for Bengaluru here.

43′ FREE-KICK FOR BFC! Costa Nhamoinesu commits yet another foul in a possible scoring position. Bengaluru has been attacking with number forward in the last few minutes.

40′ VERY CLOSE! BFC centre-back Juanan plays a long ball towards Udanta Singh from the other half. Udanta rushed past Kerala’s Costa Nhamoinesu and Jeakson Singh with his pace and was close to goal. But Sandeep Singh tracked back right in time to make the clearance with a sliding tackle.

37′ THROW-IN FOR BFC! Udanta Singh gets the ball just outside the box. He dribbles past an opposition player and tries to take a shot. But the ball is deflected off a defender as it goes out.

31′ AND IT’S TIME FOR THE FIRST HALF COOLING BREAK!

29′ BACK-TO-BACK FREE-KICKS FOR KERALA! Sandeep Singh tried to reach the first cross, however, he was fouled just outside the box. Vicente Gomez took the next free-kick but his shot was a poor one as Bengaluru regained possession.

26′ There had been nothing to separate the two sides in the last 15 minutes. Cleiton’s goal could prove a decisive factor in how the game shapes up from here.

23′ GOOOOOAAAAALLLLLL!!!!!! CLEITON SILVA SCORES!!! BENGALURU FC 1 – 0 KERALA BLASTERS FC!!!!! Rahul Bheke attempted a long throw from the right flank. The ball beat everyone, including the likes of Erik Paartalu (BFC) and Costa (KBFC) who went for headers. It finally fell to Cleiton Silva who found the back of the net with a brilliant shot on the half-volley.

20′ SAVE! Sahal Abdul Samad makes a brilliant move forward. He evades a few Bengaluru players with his amazing footwork and gets into the final third. However, he takes one touch too many and hits the ball straight at BFC keeper Gurpreet Singh from close range.

17′ WHAT A CHANCE! Kerala forward Gary Hooper tries to find a teammate inside the box. But his attempted pass hits a defender and the ball fall backs to Hooper, who fires it over the bar. This is a big miss!

14′ CORNER FOR KBFC! Suresh Wangjam is alert much to BFC manager Naushad Moosa’s delight as he sends the ball out of play from a dangerous position. It will be a KBFC set-piece though. Costa Nhamoinesu is at the receiving end of a cross from the right. But he heads the ball over the goalpost.

11′ CHANCE! Udanta Singh receives the ball after a rebound close to the box. He takes good first touch and has a shot on target from a narrow angle. The ball flies over the crossbar for a Kerala goal-kick.

8′ Bengaluru FC has started the game well. It already holds an advantage over Kerala Blasters FC, having won five out of seven outings against the team. BFC’s only loss came during ISL season six in Kochi.

5′ SHOT! Erik Partaalu exchanges a few quick passes and moves towards the KBFC box. But the Bengaluru midfield isn’t able to find the target with his shot. He just hit one straight at Kerala keeper Albino a few moments ago.

2′ FREE-KICK FOR KBFC! Amay Morajkar pulls down Vicente Gomez from behind. The referee awards aet-piece to Kerala. However, the Blasters are unable to capitalise on Sahal Abdul Samad’s cross into the box.

7:15 PM: As Kerala Blasters FC and Bengaluru FC get ready to face off in match 65 of the 2020-21 ISL, here are the important stats, players to watch out for and head-to-head record from the big Southern Derby. (FULL STORY)

7:00 PM: STAT ATTACK! Kerala has conceded 20 goals, most by a team in ISL-7. The team has also conceded five penalties, joint most by a side in the tournament. KBFC has 8 different goal scorers this season, which is the joint most too.

On the other hand, Bengaluru is winless in its last 5 matches, having lost four of those. The outfit has failed to keep a clean sheet in its last eight games as well. BFC has scored nine of its 13 goals this edition in the second half.

6:15 PM: From Carles Cuadrat’s departure to what Kerala Blasters needs to do to improve, our reporters Aashin Prasad and Shyam Vasudevan talk all things ISL in our latest episode of the Full Time Show. Listen in:

The seventh edition of the Indian Super League got underway inside a bio-bubble in Goa on November 20.

The tournament, spanning over four months, will see 11 teams play each other in a league and playoff format across three venues. Following the inclusion of SC East Bengal, this season will feature 115 games, up from 95 last season.

After having arrested a string of four consecutive defeats with a 1-1 draw against NorthEast United FC, Bengaluru FC (BFC) will look to get its season back on track when it meets Kerala Blasters at the GMC Stadium in Bambolim on Wednesday.

Naushad Moosa’s side is currently seventh with 13 points from 11 games, but the interim coach believes that all is not lost yet and that his side is very much in the race for a playoff spot. “It’s not like we have given up,” Moosa said on match-eve. “We still have nine games and teams are still close by and things are still open. So let’s hope we do better and get some points.”

The Blasters are one of three sides BFC has registered a victory against this campaign. But Kibu Vicuna’s team has seen an improvement in form since then, though it is precariously placed in 10th position with 10 points. The outfit’s two victories have come in the last five matches and it took an injury time equaliser from SC East Bengal to deny a third, last Friday.

“The circumstances are different [from the last meeting] but we are preparing for every game in the same manner,” Vicuna said. “[our aim] is to play well and try to win and improve our defence and attack.”


Blasters will surely be helped by the fact that BFC will be without influential midfielder Dimas Delgado, who has returned to Spain following a family emergency. After Ashique Kuruniyan, Delgado will be the second sure-shot starter BFC will miss. Moosa hinted that it would be the last we would see of the Spaniard this season, with games coming thick and fast and strict quarantine rules in place for travellers abroad.

“We have to cope,” said Moosa. “We have some quality players and we will be trying them [out]. We are not changing much in the way we are playing. We are just asking players to keep the ball more instead of playing those long balls; to keep the ball when you have it and be compact when you lose it. With Dimas gone, we will get a new player and we need to see how much time that player will take.”

Vicuna seemed to believe that place will go to Fran Gonzalez, a player he coached last season to the I-League title at Mohun Bagan. Gonzalez, Bagan’s joint top-scorer then with 10 goals, can play both in defence and midfield, but has struggled to nail down a place at BFC, starting just two games.

For Blasters, defender Bakary Kone, who has missed the last two matches because of an injury, remains a doubt. BFC’s new signing Xisco Hernandez will be unavailable for two weeks owing to mandatory quarantine. 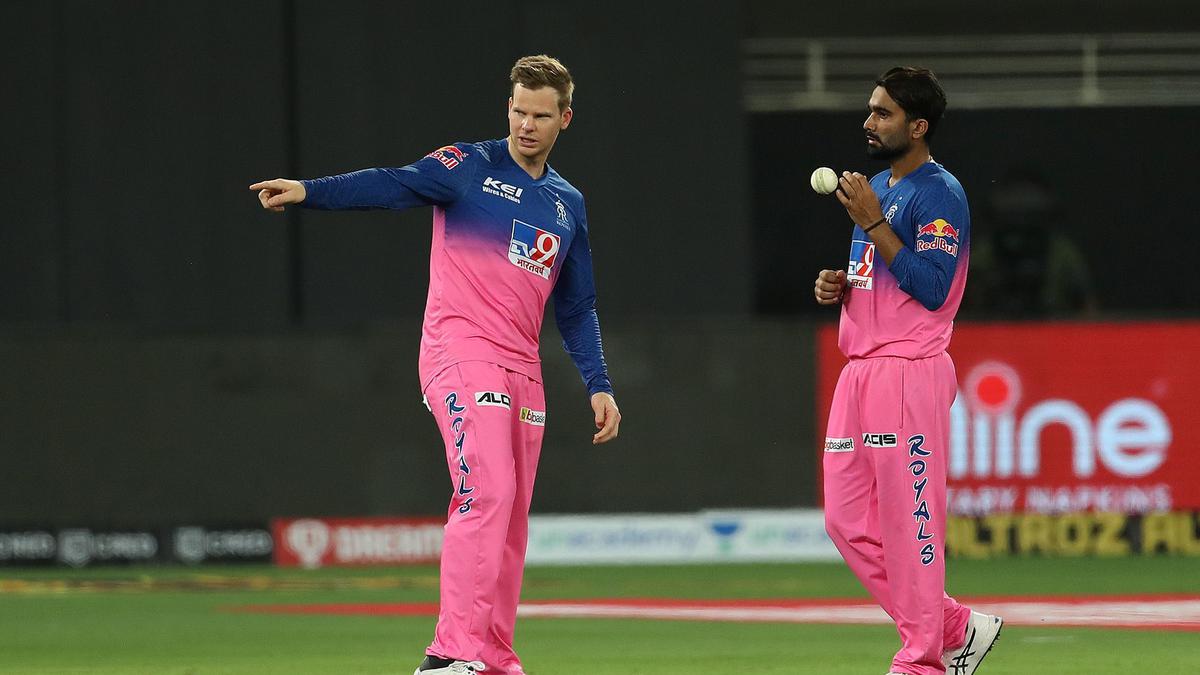