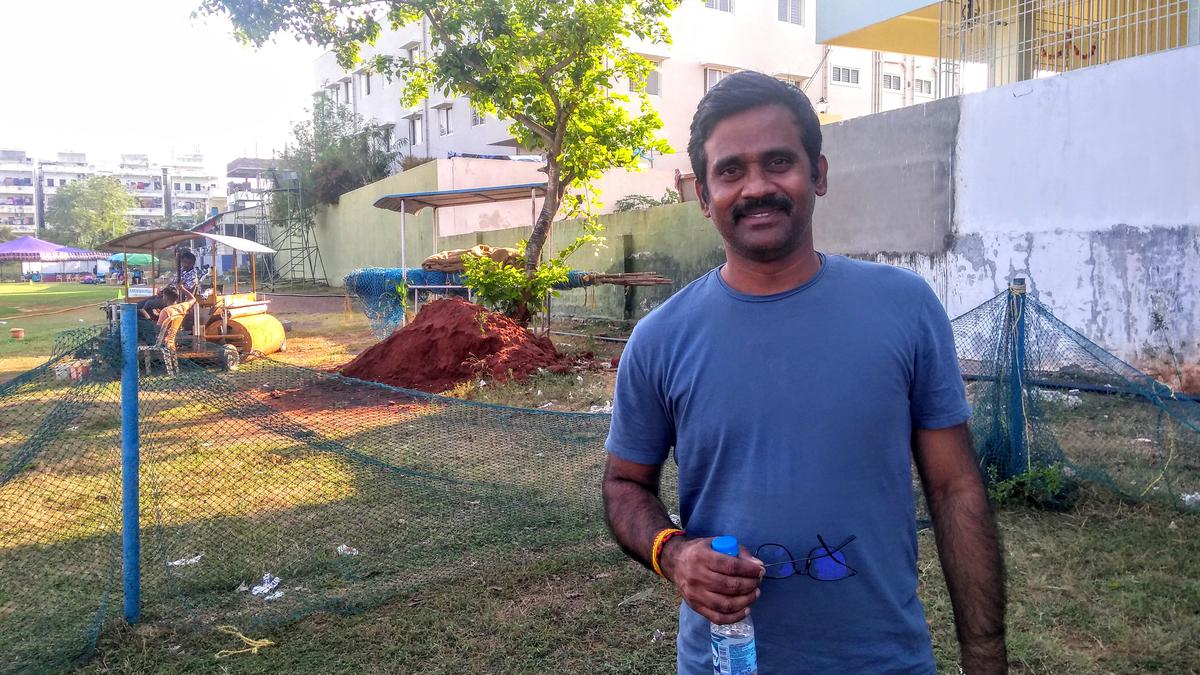 “Many have told me that I look like actor Akkineni Nagarjuna. You aren’t the only one,”  Y. Venugopal Rao chuckles, while having lunch during the Ranji Trophy quarterfinal at the CSR Sharma College Ground in Ongole. He is no Telugu movie star but no less than a superstar either. How many players have a stand or a gate named after them? Dr Y.S. Rajasekhara Reddy ACA-VDCA cricket stadium in Visakhapatnam built one in his honour last year for his heroics in domestic cricket. He retired in July 2019. At present, he is the Director of Cricket Operations in Andhra Cricket Association.

There is no starry vibe in Rao. In a t-shirt and denim, the bespectacled man – who once shared the dressing room with Sachin Tendulkar, Sourav Ganguly and Rahul Dravid – has been attending the Andhra-Saurashtra match from 9 am to 5 pm. At times, talking to curators, officials, overseeing net sessions at the practice wicket and offering tips to youngsters in the Andhra side. In a chat with Sportstar, the 37-year-old looked back at his formative years when he made his ODI debut under Rahul Dravid’s captaincy in Dambulla in 2005 – a dream come true for a boy from Gajuwaka, a suburb in Visakhapatnam.

Is there a difference? It is same as playing international. It is very hard to play domestic. To prolong for so many years is not easy. You need to be mentally and physically focused to do that for 20 to 25 years. It is a long domestic season. I never felt the length though. In between, I did feel like giving up but it all depends who you are travelling with. When I retired, I was not physically fit and mentally also I could hear my body giving up.

You played 16 ODIs for India. What is your best memory from the international stint?

Mohammad Kaif, Yuvraj Singh and I were all one batch from the U-19 World Cup in 2000. Then, I played with Sachin, Sourav and Rahul. I think spending time with them in the dressing room will remain as best memories. Once you wear the India cap along with Sachin, whom you have seen on television while growing as a player, is itself an achievement. For a boy from Gajuwaka, a small town in Andhra, to go to that level shows that anybody can achieve it.

How long did it take you to soak it in?

The feeling of being with Sachin? Well, just a couple of days. You know it is happening but you shouldn’t let that affect your focus.

Greg Chappell was India coach when you made your debut. Former players say it was a tough phase in Indian cricket…

I am not too big to comment on something that happened many years ago. As far as my batting was concerned, he had told me the areas where I could improve. If you ask me now, I don’t find it is necessary to talk about the negatives. India is a result-oriented nation with millions watching. Being a coach is a lot of pressure.

Not too many cricketers from Andhra have played for India. As of now, its been M.S.K. Prasad, you, Hanuma Vihari and K.S. Bharat [currently with India A] who is in the pool. He is yet to make his debut. Do you think the state players are going wrong somewhere down the line?

I am trying to figure it out how to get more players to play the higher level and the IPL. I have a few plans. During the season, I had a brief chat with a few players and coaches across age-group cricket. There are a lot of U-23 and U-19 boys who are performing well. For the first time, we are in the race for the semifinal as you can see. So things are definitely better. With the youngsters, I can see the future. Some of them down the line can break it to the bigger stage, I can sense it. I need to figure out how to develop them. Facility-wise, everything is same as other associations but the guidance needs to be there. All bigger states – Karnataka, Mumbai and Delhi have guidance from senior players.

But the approach towards players from smaller towns had changed with M.S. Dhoni…

Yes, of course. A lot of people from small towns like me, him, Bhuvneshwar Kumar, Praveen Kumar, Suresh Raina represented India. I am not talking about the states, I am talking about the small districts and cities like Meerut and Muradnagar. When Dhoni and I used to travel with India A, we kept saying that mental focus is the main thing and also the feeling that you belong here. When you see these youngsters from smaller cities, they are mentally prepared and that’s why Dhoni was successful… even Navdeep Saini [from Karnal] and Yuzvendra Chahal [from Jind].

The whole world is talking about Dhoni’s retirement. Being an old friend of his, do you feel he should play the ICC World T20 later this year?

Definitely. He should also play the 50-over World Cup which will happen in India in 2023. He is a valuable player for any ICC tournament. I know he didn’t play after the World Cup semifinal last year but it is not difficult for him to come back. He is Dhoni. He knows how to handle these things. A guy who has all the ICC trophies. Nobody else is close to him as a captain or a wicketkeeper-batsman.

What’s your vision for Andhra cricket as the Director?

To do all that we couldn’t do when we played. My idea is to guide the young kids and show them the right way so that they can get to their goals easier. I can mentor them.

How much of a help is Sourav as the BCCI head? Being former team-mates, it must help in the communication in matters related to state cricket…

We have already met twice since he became president. Everybody is happy that a cricketer is leading the board. I also know Jay [Shah] very well as I have also played for Gujarat in the past. They have a vision.

Many former players have been playing the T10 tournament in Abu Dhabi. Will you be open to such offers?

It depends on the time when the offer comes. On that particular time if I feel I should, I will. Too early for me to say now.