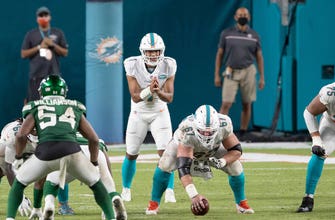 MIAMI (AP) — Miami Dolphins quarterback Tua Tagovailoa was limited in practice Wednesday because of a lingering thumb injury, leaving in doubt his availability Sunday against Cincinnati.

Tagovailoa missed last week’s game against the New York Jets because of the injury to the thumb on his throwing hand. Ryan Fitzpatrick replaced him and threw two touchdown passes in Miami’s 20-3 win.

Tagovailoa, whose left hand was taped for practice, said coach Brian Flores and the medical staff won’t rush his return to the lineup.

“I’m feeling good,” Tagovailoa said. “As a competitor you always want to go out there. They have the best interests for us. They wouldn’t put me out there if it would be harmful for myself. Just taking it one day at a time.”