Richa Chadha and Ali Fazal made their relationship official at the 74th Venice Film Festival when Ali’s film ‘Victoria & Abdul’ premiered. The two have worked in films like ‘Fukrey’ and ‘Fukrey Returns‘.

And according to the recent reports, the duo will get married on April 15 this year. However, there is no official statement from both sides.

Now, Richa recently shared a picture of her with late legendary actress Smita Patil. Paying homage to the late actress, Richa wrote a long caption along with the post.

Soon, Freida Pinto commented on Richa’s post and wrote, “Two of my favourites in one frame. Now that’s the perfect start to my day! @therichachadha”.

But what caught our attention was Richa’s reply to Freida’s comment. She wrote, “@freidapinto Freida! Come in April 🎈💕” 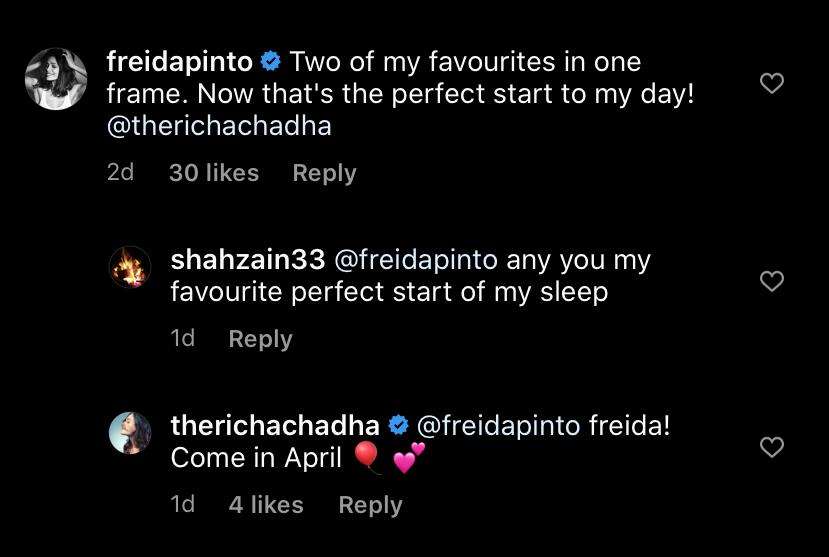 Well, with that, it seems Richa just confirmed the rumours of her marriage in April!

Reportedly, the couple is planning four functions, the wedding ceremony and three receptions in Delhi, Lucknow and Mumbai. The report further stated that the Lucknow reception will be on April 18 while they will host another reception in Mumbai on April 20.

Exclusive: THIS actor will play Janhvi Kapoor’s father in the ‘Helen’ remake – Times of India