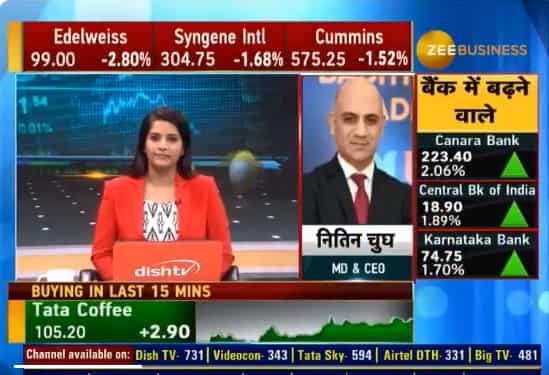 Ujjivan Finance has performed well in Q3 FY2019-20. On a high, Nitin Chugh, MD and CEO of Ujjivan SFB spoke to Zee Business about performance as well as expectations from Budget 2020. Here is a brief exchange:

Q. What are your expectations from Budget 2020?

A. In business, there’s no specific expectations but we are hoping that government will do something to bring consumption or economy back.

Q. What kind of demands can small finance bank can expect from Budget 2020?

A. If we see our target market, we can’t see any problem with the demand actually in our case, demand is consistent. The market where operate we call it mass market, which belongs to lower income group including middle class also. There the demands like housing loans, business loans is popular, We deal with micro small enterprises. We can’t see any issue with demand there.

Companies to get extended tax withholding on ECB interest payout
On the subject of Budget 2020, another news grabbed eye-balls today. According to an IANS report, Indian companies seeking foreign debt may continue to see cost of capital fall amidst a rise in overseas investor interest with government looking to extend a concessional 5 per cent withholding tax on these overseas papers.

Sources said that finance ministry has examined the proposal and may consider extending lower tax on external commercial borrowings (ECB) made by the corporate sector in foreign currency beyond the current sunset date of June 30, 2020. Such extension may form part of budget proposals for FY21.

Though the exact quantum of extension could not ascertained, in earlier discussions, continuing with 5 per cent withholding tax for another two years, till June 2022 was considered. This would mean that if foreign currency loans are raised prior to July 1, 2022, they would attract lower withholding tax.

While withholding tax on int set set payment to non residents on foreign currency loans, ECB and long term infra bonds (or rupee denominated bonds) currently stands at 5 per cent, such tax is levied at higher rates of 10-40 per cent on interest transfers on non specified instruments (20 per cent) , royalty/technical fees (10 per cent), long term capital gains (10-20 per cent), winning from horse races (30 per cent), other I come (40 per cent).

The extension of the concessional withholding tax rate including on rupee denominated bonds may act in favour of borrowers, leading to a likely reduction in borrowing costs. This could prompt more such issues. Low cost borrowing is important for fund mobilisation and investment by the corporate sector. This has also a bearing on country`s growth prospects that has slowed to six year low level of 4.5 per cent of GDP in the July-September quarter.

Interest paid to a non-resident on foreign currency borrowing is subject to withholding tax. A concessional withholding rate of 5 per cent is being charged on interest earned by foreign entities in ECB or in bonds and Government securities.

The government first announced extension on concessional tax on ECB in the budget for FY18 for a period of three years till June end 2020. It also liberalised end use of ECB by including a host of activities while allowing a larger segment of entities eligible to tap ECBs of varying maturities. Withholding tax on ECB otherwise would work out to 20 per cent.

At a time when domestic interest rates remain relatively higher, ECB provides a window to mobilise cheaper debt and reduce their overall cost of borrowing.

As the coronavirus pandemic persists, here’s one encouraging sign for Chinese exports

Op-Ed: Getting inspiration from the Greatest Generation’s economic hardship and shared sacrifice