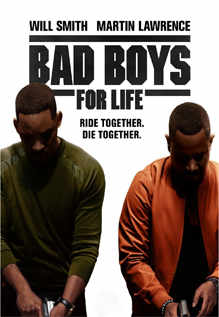 STORY: After 25 years of being together, ‘bad boys’ Mike Lowrey (Will Smith) and Marcus Burnett (Martin Lawrence) are at the crossroads of their exciting lives. But even as one of them wants out, the dramatic turn of events lead them to more deaths, destruction and startling revelations.

REVIEW: It’s the year 2020 and Marcus now wants to lead a peaceful family life away from all the violence. But his partner in crime Mike cannot let go so easily because this time, the horrors of his past have come to haunt him and it’s destroying the world around him. He must do what it takes to protect himself and exact revenge, but first, he needs to convince Marcus to get back into the game.

It’s a simple plot with many new additions in the cast. But the one who leaves a lasting impact is the film’s main villain Armando Aretas (Jacob Scipio) – a strapping young leader of a Mexican drug cartel, whose lethal blows totally belie his baby-face good looks. Mexican-American actress Kate del Castillo is also impressive as the ruthless widow Isabel Aretas, who literally calls the shots in this high-octane action comedy. The new crack team called AMMO led by Kelly (Vanessa Hudgens) has more young blood (Alexander Ludwig, Charles Melton) and they inject the much needed freshness into the proceedings. However, it’s the film’s leading duo who take their perfect camaraderie a notch higher. They’re the strongest when together. Whether it is Will Smith’s towering persona and swashbuckling punches or Martin’s poker-faced humour, it works.

Directors Adil and Bilall pull out all stops to make it more exciting. The film’s narrative and execution remains loyal to the usual trappings of a testosterone-led action entertainer with shocking developments that will often keep you on the edge. While the action and comedy elements like high-speed chases and witty one-liners work, the pace drops in parts. The film’s climax, however, is packed with more startling (almost too dramatic) revelations and some finely executed action in the picturesque locations of Miami and Mexico.

In conclusion, this one carries forward the legacy of the bad boys franchise and the magic of its leading men ensure that third time’s a charm.

Dwayne Johnson feels blessed to be at home with his ladies amid lockdown! – Times of India

Photos: Alaya F is all smiles as she gets snapped with Aaishvary Thackeray post their dinner date in the city! – Times of India

Kangana Ranaut: On the surface, my poem Aasmaan is about love, but deep within it’s about perceptions – Times of India