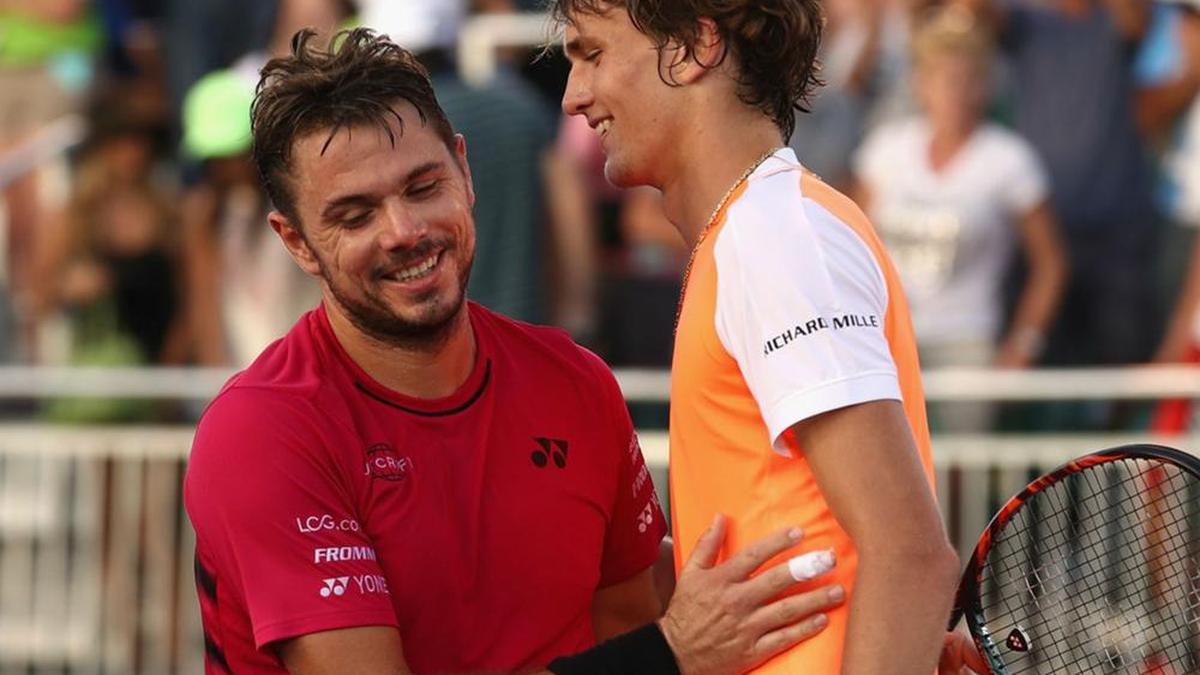 11:02 IST: Wawrinka staring at break point against him. Early on in the fourth!

Who would have thought Wawrinka will have to look on such a situation after the brilliant start in the first set! The errors have marred his game big time in the second and third and despite Zverev’s minimal lead overall, the 22-year old is just one set away from a first semi-final at the Australian Open!

10:52: Zverev on the serve for the third set! Wawrinka will look to shrug off the awry jinx here, or there beckons another five-setter too go through to the semis.

10:51: Wawrinka on the backfoot but somehow finds a way to come back into this! He was on the brink, much like his elderly compatriot in Federer! Wawrinka holds four games to five.

10:49: Two set points for Zverev! Wawrinka absolutely distraught on serve! What a topple has this been!

10:46 IST: Zverev closes in on the set. Takes the lead to 5-3. Wawrinka leaking errors on either side, the forehand, backhand – all bearing the brunt.

10:41: A pleasing sight it is to see that Wawrinka backhand. It has faltered at crucial junctures today but not this time. Stan holds. 4-3.

Zverev eases through his serve! The serve growing in precision and pace and Wawrinka has caught up in a mess much like Sascha’s curls!

A stunning turn of events!

Zverev breaks! 3-2. Stan is livid with himself. Fails to keep the touch on a long as the ball bashes the net. Remarkable turnaround for Sascha – more of it must be credited to Stan who has gone off ball in a stunning manner.

10:33 IST: Break Point for Zverev! Surprisingly, the unforced errors have marred Stan’s fine run up until the end of the second set.

10:32 IST: And Stan follows the serve with some serious approach – risky but hovers the pass in an intangible finish!

2-2, Zverev keeps his hold easily. Consistency is on point now and the contest is gradually levelling across.

10:29: Zverev and Stan, both have strong on serve in the third and there we see a stellar passing shot from Stan. Zverev slices the ball and Wawrinka reaches there just in the nick of time to dish out a stellar return!

10:25: Wawrinka holds! The face tells it all. He is not happy with the way in which he let down himself towards the end of the second set and looks more focused now as he leads 2-1 with Zverev to serve.

Zverev looks in his element now as he moves in on the rallies and powering the volleys. Momentum is gradually shifting in to the middle!

10:22 IST: And Stan breaks the German! 1-1 in the third! Zverev misses to keep the forehand in and has slopped it wide off the baseline, just dropping off court.

Despite his fluffy returns to Wawrinka’s forehands, Zverev has found a way around here. Wawrinka can blame no one but himself as his rival has been clearly below him throughout the second set as well – barely looking to survive on serve.

Sascha stuns Stan! Draws level in the game as he makes it 1-1  after two sets. Just when Stan seemed to go on the overdrive, Zverev has forced the Swiss to move off track to cash in on crucial points.

10:12 Zverev serving for the set! And is cruising through! A hammering serve on point as Stan as slightly lost the eye off the ball!

And Zverev snatches the break! 5-3, the World No.7 has clinched it out of nowhere! Roaring in delight!

If Zverev manages to hold on serve and take the set to the tiebreak – he will be hoping to shape up on the return – Stan is undeterred with this passage of play as Zverev has hardly taken the fight to the veteran.

The cross-court backhand is stifling Zverev here. Wawrinka on serve with high-class pedigree!

Off the top-draw! Stan’s, the man!

10:04 IST: The serve is surging. Zverev is keeping the fight on here in the second set. Alive on serve and fends off the trouble in a minute! Sascha leads 4-3.

10:02 IST: Wawrinka holds and how! This is amazing all-round tennis. The forehand winners are of top-notch, Zverev is absolutely out of the contest when Wawrinka shells out such magic.  Three-all.

What has bugged Zverev today. Indeed he did not have much competition in the earlier rounds but the agility on serve and return has shot down many a mile. Is a first-semifinal berth pressure crippling the young German?

09:57 IST: Zverev is easing in on his serve now. The confidence and power in his shots is back to the fore.

Wawrinka makes a successful challenge on serve and seals the game to make it 2-2.

09:54 IST: Stan faltering on serve for the second time, another double-fault.  And he follows it up with an excellent first serve!

Zverev holds! 2-1 in the second. The powerful serve is back to the fore, Sascha is slowly picking up the pace.

09:50: Zverev can not let go of the slightest opportunities to Wawrinka. Will be hoping to force the Swiss to make his own inroads to enforce pressure.

Stan has been absolutely pin-point on serve and the backhand is working in equal measure to that strong forehand groundstrokes.

A bullet serve there from Stan under pressure! Deuce

09:48: A doube-fault from Stan, Zverev gets a lead here. And he forces a break point.

09:44 IST: Zverev looks more steady on serve this time around as he holds the first game. 1-0

There was absolutely minimal one can do when the Swiss is in such a mood. Can Zverev find the flare to rise from the shackles?

In just 24 minutes, Wawrinka snaps the first set. Zverev is left shell-shocked as the scoreline reads: 6-1

09:39 Wawrinka despite the hefty build – is cracking on court – cover almost every inch with ease and just slashing the winners. Zverev is clueless right now, to be honest. The ‘Stanimal’ has struck!

Zverev is struggling on the second serve, and Wawrinka lights up the winner!

09:35 Like I mentioned earlier, Stan staying low and deep – Sascha moves in deftly to pass a tough, Stan finds it hard to cover that up.

Zverev has been absolutely subdued! Wawrinka off to a scorching start on a Melbourne afternoon; 5-0 in the first set.

09:31 IST: Wawrinka absolutely ripping off on serve, graced by crisp returns from the baseline that gets Zverev off his toes.

A horrendous shot on approach from Zverev, almost off to the last rows in the crowd! Wawrinka leads 4-0.

Sascha on the back-foot and Wawrinka breaks once again!

Stan is staying so deep off the baseline – in the shadows! One can barely see him on screen!!  Zverev can bank in on some deft touches on approach.  30-15

09:27 IST: An absolutely must-win game for Zverev on serve!

Interesting to note that Zverev is yet to drop a set in the tournament. Stan seems to care little for it right now as he smashes on serve! A 3-0 lead in the first set!

09:21 IST: It’s been a blistering serving game for Stan as he picks the first game and has broken Zverev’s serve in the second. The Swiss takes an early lead! 2-0

And there we move to the centre of the action at Rod Laver Arena! Stan v Zverev! Game on.

“He’s [Zverev] been in the top 10, top five since a few years now. I also lost to him a couple of times. It’s going to be a difficult match for sure.”

“Stan is a multiple Grand Slam champion and it is going to be very difficult to play against him.”

There is something about this Swiss men, the tennis nuts in particular! ‘It’s never over unless it’s over’ and the same has been evidently portrayed through two great comebacks from the Swiss duo of Roger Federer and Stan Wawrinka over the week. The 34-year-old Stan, the 2014 Champion here, can never be counted out of contention. Having been away for a while after multiple injuries, Wawrinka – in a revitalised stature – is back in business as he aims to make space among the top players on tour – once again.

Wawrinka will be high on confidence after slashing World No.4 Daniil Medvedev in a five-set marathon, couple of days ago after falling himself 2-1 sets down before seeking redemption. The match would have surely taken a toll on the Swiss and will be hoping to be at his physical best today.

He now faces German youngster Alexander Zverev – one of the youngest to be in the top 10. Zverev, after a disastrous to the year at the ATP Cup has struck red-hot form right in time for the year’s first Grand Slam. In their previous two meetings, Zverev had the number over Stan and that will hold good for the German’s confidence.Zverev having beaten 17th seed Andrey Rublev in the Round of 16 in convincing fashion – will be high on morale and condition. The Russian Rublev was having a stellar start to 2020 with a 15-match winning streak and was outclassed by “Sascha” in three sets.

In an evenly poised contest, Zverev will hope to go past his best performance at the Australian Open (4th Round, 2019) by overhauling a veteran three-time Grand Slam champion. Rod Laver Arena braces up for a dicey afternoon!